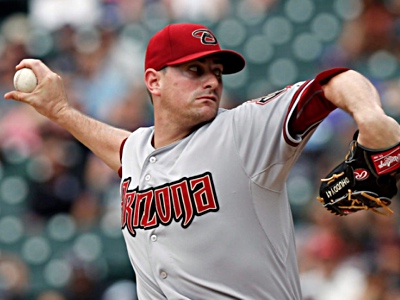 There was a time when Daniel Hudson was a mid-20s, breakout starting pitcher with the Diamondbacks, who’d just posted a 4.6 WAR season.

Unfortunately, that was five years ago, and, since then, the now 29-year-old righty has twice had Tommy John surgery. Oof.

We’re talking about Hudson right now because the Tribune reports the Cubs are among the teams that have reached out to the free agent. The Cubs have obvious needs in their bullpen, and perhaps Hudson could fill a role, even if not necessarily in a late-inning/high-leverage spot.

You’re thinking that the ERA stands out, right? Well, it does, and it’s not great, though it’s softened somewhat by the fact that the Diamondbacks’ defense has been rough (middle of the pack in 2015, second worst in baseball in 2016), and Hudson’s home ballpark is unkind (second most hitter-friendly in baseball).

The other thing you notice on Hudson on a preliminary glance is that the ERA for those two years is propped up almost entirely by one 9.2-inning stretch this past season during which Hudson allowed 26(!!!) earned runs. It all counts, obviously, but if I were going to dig in deeper (and we will if the rumors intensify), I’d sure as heck start right there to see if there was something flukey going on.

Since the rumor is fairly light tonight, though, I’ll keep things fairly light. Hudson absolutely makes sense as a bullpen addition for most teams, and, despite the surgeries, he does have that starting background. That makes you wonder about his ability to be a swing pitcher or multi-inning reliever going forward.

Even as a one-inning guy, the further he is removed from two Tommy John surgeries, you wonder if there is the possibility of improvement. Hudson doesn’t turn 30 until March, for what it’s worth.