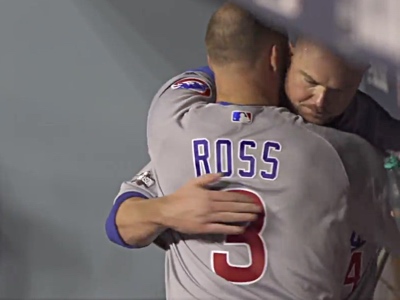 An update on my … situation. I was able to see the doctor yesterday, and although it will be many more weeks before the hematoma dissipates (unfortunately there’s nothing that can accelerate that process), I was cleared to do light activity – the main thing being able to pick up The Littlest Girl again. Not being able to do that was not only painful from a but-I-love-her-she’s-my-baby perspective, it was painful because it effectively grounded The Wife from being able to do much of anything, since she always had to be present and available. So that was great news. From there, I can add on more activity as pain allows.

Fingers crossed that the next update you hear from me is in a couple weeks when things are basically back to normal.

Freaking incredible: they even #FlyTheW in Antarctica. @Cubs

(pic via BN'er mjj and his agency, The Escape Pod) pic.twitter.com/9ypcwtpYGA

Ken Griffey Jr. was incredible. Remember this crazy catch? He broke his wrist and still caught the ball. pic.twitter.com/mQmO0AxVvY

Heads up on Cubs gear: Fanatics extended their 30% sale through today – https://t.co/ZcY9QzsOFD pic.twitter.com/jAEfcvnYs0