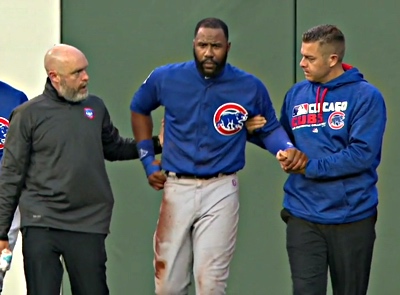 My finger muscle memory is going to have to change.

Per the AP, one of the rule changes coming in the new Collective Bargaining Agreement is the shrinking of the 15 days minimum stay on the disabled list to just 10 days.

The immediate implications of this change aren’t too difficult to discern, though I’ll be fascinated to see how teams try to game the new system, as unintended consequences pop up (they always do).

The rule change is good news for the players, who may now be less inclined to play through a minor injury, knowing that a trip to the DL costs the team 33% fewer games now.

For teams, similarly, they will probably be much more inclined to utilize the disabled list for minor bumps and bruises instead of playing shorthanded for five or six days.

(I use the Jason Heyward picture there intentionally – I’m reminded of early this past season when the Cubs twice played shorthanded for a few games rather than DL Heyward because there was an expectation that, although he needed to rest, he’d be OK in well under 15 days. Perhaps if the DL had been just 10 days at that time, maybe he gets a little extra rest.)

This change is probably good for the players financially in the aggregate, too, because it could mean more players getting big league service time. It seems like having quality upper minors depth could now be just a touch more valuable, because it’s easier to shuffle those guys in and out without having to park a star on the DL for 15 days.

Perhaps one small risk is that players will feel pressure to return from injuries after just 10 days now, instead of at least having to rest for 15 days, but managing that balance is an issue no matter where you set the cutoff.

All in all, I think I really like this change, both for teams and for players. As I said, the unintended consequences will be interesting to follow.

If you missed it earlier, one of the other notable changes: the All-Star Game no longer “counts.”