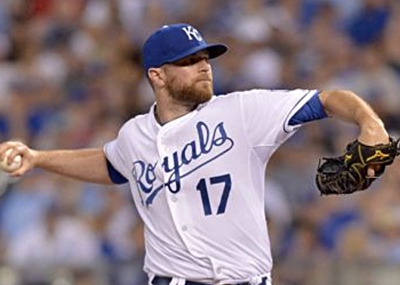 … probably minus Aroldis Chapman, Trevor Cahill, and Travis Wood (free agents). Potentially minus Mike Montgomery (who could leave for the rotation), and plus the newly unnerving health/performance questions for Pedro Strop and Hector Rondon.

On paper, then, the Chicago Cubs bullpen in 2017 actually doesn’t look all that much like the 2016 edition, and might be in some trouble.

Fortunately, the Cubs’ front office is well aware of the holes in the bullpen, as well as the Cubs’ enviable, but ever-fleeting position as the 2017 World Series favorites. In other words: moves will be made to address it. That much we know.

What we don’t know, however, is where those moves will come from.

In all likelihood, some organizational pieces will be brought along quicker than anticipated (Carl Edwards Jr., Rob Zastryzny, Felix Pena, for example) while some fringier free agents will be brought in as supplement, but whether or not the Cubs will be involved in the upper tier of the free agent reliever market has yet to be determined.

Indeed, while Kenley Jansen feels like a good, but extremely expensive fit, there have been some other interesting targets thrown around the rumor mill lately. Most recently, Jesse Rogers (ESPN) has heard that the Cubs have checked in on each of Greg Holland (free agent), Wade Davis (trade), Alex Colome (trade) and A.J. Ramos (trade).

So we will, too. First up, Greg Holland.

If you recall, Greg Holland received Tommy John surgery at the end of the 2015 season, forcing him to miss the entirety of 2016. Because he’s now a free agent heading into 2017 (who didn’t play his most recent season), Holland held a showcase earlier this month to show off what he’s got left and the Cubs were reportedly in attendance. In fact, at the time, each of Jon Heyman and Gordon Wittenmyer suggested that the Cubs, along with the Giants, Red Sox, Rays, Indians, and Mariners, were among the most interested parties after seeing Holland’s display.

I’ve already written a deeper dive on Holland’s past and potential for the future here, so check that out if you’d like to know more. In short, a drop in velocity preceding his injury is quite a troubling indicator, but that may have been rectified by the surgery. And as a recently dominant closer, I think Holland is an extremely interesting target. Most reports suggest he may command, at most, just two years.

Wade Davis (and the rest of the relievers on this short list), unlike Holland, is still under contract with the Kansas City Royals for $10 million in 2017. After converting into a reliever full-time in 2014, Davis has posted a sparkling 1.18 ERA (1.86 FIP), a 33.1% strikeout rate, an 8.4% walk rate and 6.4 fWAR in three seasons (he’s also a two-time all-star and finished top 8 in the AL Cy Young voting twice during that stretch). The 2016 season – a year in which he finished with a sub-2.00 ERA – was actually the worst of his full-time reliever seasons. He’s good, do you get it?

The big potential rub with Davis is that he twice missed time with a forearm strain last year.

Alex Colome’s name first popped up in connection to the Cubs a few days ago (in a theoretical trade target sense), and his name stands out to me the most. Upon converting into a reliever for the first time in 2016, Colome broke out for the Rays in a big way. His 1.91 ERA (2.92 FIP) was supported by excellent peripherals (31.4% K-rate, 6.6% BB-rate) and led him to a 37-save season. He’s also just about to turn 28 years old and is under team control via arbitration (beginning next season) through 2020. A pricey, but very compelling, trade target.

And finally, A.J. Ramos has quietly been a successful reliever (turned closer) for the Marlins over the past four seasons, having worked his way up to his first 40-save season in 2016. With a career 2.66 ERA and 3.15 FIP, Ramos has consistently outperformed his peripheral statistics for all five of his Major League seasons, but turned in his best FIP and WAR-season in 2016 (2.90 FIP, 1.4 fWAR). Having just turned 30 years old, Ramos also has age on his side, as well as two more (arbitration) years of team control.

It’s uncertain precisely what it would cost to acquire any one of the pitchers above, especially because each of them will likely demand very different prices. In Holland, you have a formerly dominant free-agent closer who hasn’t pitched in a season. In Davis, you have an aging, but far more consistent pitcher with a longer track record of elite-tier success. In Colome, you have a breakout, younger pitcher with the most team control, but the shortest track record. And in A.J. Ramos you have a solid reliever with a couple years left of control, but peripherals that suggest regression could be around the corner.

But much of that is beside the point.

The key takeaway here is not about whether the Cubs will go after one of the four pitchers above, or even one of the big-three relievers on the free agent market. Instead, the takeaway is that the Cubs have options. Tons of them. Those four relievers above, plus the big three in free agency, plus the dozens of other relievers we don’t even know are available, strongly suggests that the Cubs will be able to do what they want – whatever that is – to do in the bullpen.

I know we’ve repeated how weak the current crop of free agents are and how expensive the trade market is for pitchers, but it just so happens that most of that does not apply to relievers this time around. The Cubs could go young, old, injured, upside, track record, lotto ticket, sure-thing, and anything in between. There are actually many available relievers, from closers to LOOGYs, so the Cubs are in a very good position, given their area of need.

So just sit back and enjoy watching the front office work.