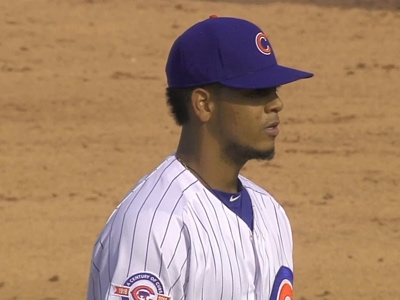 The free agent and trade markets are littered with intriguing bullpen options (the latest connected to the Cubs being Daniel Hudson, to several trade options, and had them signing a lefty), but the Cubs have in-house candidates worth giving a second look.

The Cubs’ front office will be tasked with the challenge of building a bullpen that can carry them through the rigors of a 162-game season, but also effective enough to navigate the murky waters of postseason play.

No matter what returnees such as Hector Rondon and Pedro Strop provide after taking an offseason to get healthy after their respective injuries, and no matter what the Cubs elect to do in the later/high-leverage innings, depth will play a major role in how the bullpen fares in 2017.

Nineteen relievers (not including Miguel Montero’s cameo against the Mets in July) made appearances for the Cubs in 2016, including 16 different arms in high-leverage situations.

Here is a look at a trio of internal options on the verge of taking the next step in their development out of the bullpen.

Pena’s peripherals showed plenty of positives in his late-season stint with the Cubs, starting with his strikeout rate, punching out 13 of 35 batters faced, while walking only three. He also posted a 4.3 K/BB ratio and 0.89 WHIP while limiting opposing hitters to a .156 average (five hits in 35 PA). So, how did Pena end up with a 4.00 ERA in a limited number of innings?

Three of the four earned runs he allowed came in his second career outing. But in the 7.2 innings in nine appearances that came after that, Pena struck out 10 of the 28 batters he faced, walked only two, and allowed only three hits and one earned run against the Brewers (four appearances), Pirates (three appearances), and Cardinals (two appearances).

Not all the peripherals are pretty for Pena – specifically his 42.1 percent hard-hit rate and a relatively low 38.9 percent ground ball rate. Still, Pena’s slider generated a 58.33 percent whiffs per swing rate, while his four-seamer (which averaged 94.3 mph) was a quality swing-and-miss pitch, too.

Rob Zastryzny: With Mike Montgomery having a foot in the door to replace Jason Hammel in the starting rotation, Zastryzny could have a leg up in filling Montgomery’s role.

Zastryzny has a starter’s pedigree with minimal relief experience, but possibly could be used in various roles. He could slot as a lefty specialist after limiting the 31 lefties he faced in 2016 to a .138 average (4-for-29) while striking out 10 and walking only one. Or he could be used as a bridge reliever, as three of his seven relief appearances were multi-inning outings. Zastryzny saw an uptick in K% at Triple-A Iowa (22.7 K%) and again in The Show (25.8 K%), where he also posted a 58.1 percent ground ball rate.

Perhaps the next step in seeing how versatile he can be is testing his abilities as a left fielder.

Pierce Johnson: There is some prospect pedigree in this potential reliever. Johnson earned top-100 status by Baseball Prospectus, Baseball America and MLB.com prior to 2014, but two years later was off the prospect radar after an enigmatic (and injury-plagued) run as a starter.

And here is this from his MLB Pipeline prospect profile:

When he’s at his best, he operates with a 92-94 mph fastball that peaks at 96 and a true hammer curveball in the low 80s. His changeup gives him an effective third pitch and he also uses an upper-80s cutter to give hitters a different look.

Perhaps Johnson’s fastball and curveball will play up out of the bullpen, and perhaps he can drop any less-effective pitches, thus making him an option in 2017.