Another Report Connects Cubs to Kenley Jansen Skip to content 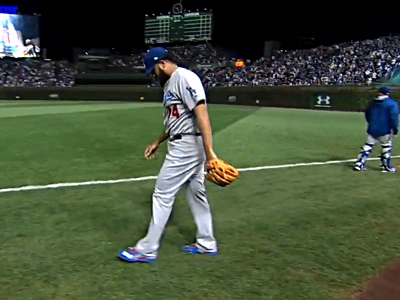 This is one of those for-what-it’s-worth reports, that, because of the specificity and the name involved, it’s worth passing on, but I’d caution you against getting excited.

Jim Bowden, whose track record in recent years is mixed, reports today that there are six teams in on free agent closer Kenley Jansen, and the Cubs are one of them. The other teams are the Dodgers, Nationals, Marlins, Yankees, and Giants. Those are about the six teams I would have expected (well, plus the Marlins, whom we learned about last night).

This is the second report of the offseason directly connecting the Cubs to Jansen, who is admittedly a perfect fit for the Cubs’ needs, but there are some caveats here.

First of all, the first report – from Ken Rosenthal – indicated that although the Cubs were checking in on Jansen (and thus might qualify as “in on” Jansen, per Bowden), they were mostly doing due diligence. That is to say, they weren’t necessarily vigorously pursuing the big righty, but were instead making sure to keep tabs on his background and market so that they were in a position to pounce if an advantageous deal presented itself.

Another caveat is that you’ve got to remember how the offseason game works: it is in a player’s (and agent’s) best interest to be pursued by many deep-pocketed teams. Thus, connecting the Cubs publicly to that player, even if it’s stretching the boundaries of an active pursuit, is a good thing to do. We, as fans, can exercise a bit more restraint, then, in how excited we get.

And finally, we can’t completely discount the statements from the Cubs’ front office, and the coterminous reports, that indicate they are not planning to spend huge on one of the big closers this offseason. If a deal falls in their lap? Sure. But that doesn’t mean they’ll blow away the market.

Have I sufficiently wet blanketed you on this one?

Let me go back the other way just to even things out: it’s not like the Cubs’ front office was telling the world the last two offseasons that they were going to spend $400ish million on Jon Lester, John Lackey, Jason Heyward, and Ben Zobrist. It is not at all in their interest to confirm publicly that they’re going hard after a big-time free agent. So they’re not going to do it.

In other words, the takeaway from all of this? The Cubs probably do dig Jansen to some extent, and they’ll continue monitoring his market. He costs a draft pick and possibly upwards of $80 to $90 million over five years, but it’s worth pointing out that the pick that he would cost the Cubs is at the very end of the first round. The Marlins, for one example of another involved team, would lose pick 14. That’s a huge difference.

For much more on Jansen’s career and future, read Michael’s deep take.