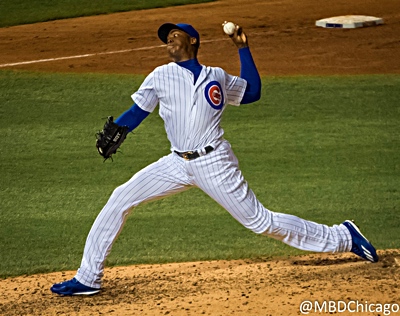 Although a lack of serious pursuit on the part of the Chicago Cubs should come as no surprise at this point, free agent closer Aroldis Chapman has said as much today, according to ESPN’s Marly Rivera.

Having spoken to Chapman today, Rivera relays a couple items of note: (1) Chapman is looking for a six-year deal, and (2) the Cubs “never expressed any interest” in re-signing Chapman, as far as he knows.

On item one, it’s going to be a tall order for a closer – even one as historically dominant as Chapman – to get a six-year deal, but we’ll see how his market plays out. And, on item two, well, if it’s true, then we’ll all just be following number one as outsiders. Chapman’s time with the Cubs will be limited, in that case, to the stretch and postseason runs of the Cubs’ first championship in 108 years.

The Cubs’ front office, as we discussed earlier today, has suggested they won’t be in on the deepest part of the closer pool this offseason. There are still reports connecting them to Kenley Jansen, but he’s also being pursued vigorously by many other teams. Mark Melancon just signed with the Giants. And now, if Chapman is not a target, it could very well be either Jansen (if for some reason he does not get a gargantuan contract with, for example, the Marlins) or some other route for the Cubs.

There will be additions in the bullpen, though. You can count on that.