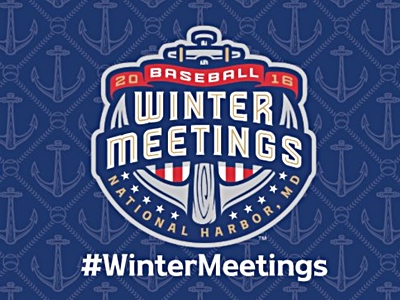 It’s Monday evening, which means the first day of the Winter Meetings is coming to a close (though we’re still monitoring those Chris Sale-Nationals rumors).

But boy was it a busy one.

So, yes, it’s been a busy day, but that doesn’t mean things are going to slow down tonight. Deals are often struck after hours at this event, so stay by your phones and computers, fellow nerds.

Rangers interested in Cubs outfielder Jorge Soler, the right-handed bat people say will come in the form of Encarnacion, Trumbo or Napoli

Industry buzz tonight is that the Royals could be looking to trade Lorenzo Cain and Wade Davis as part of a package deal.

#Royals have talked to #STLCards about dealing Cain/Davis for Wang and package of prospects. #MLB

Sources: Rangers have shown interest in Mark Trumbo. Just how strong it is remains to be seen, but Texas is looking for a right-handed bat.