Rangers May Be Checking in on Matt Szczur, In Addition to Jorge Soler Skip to content 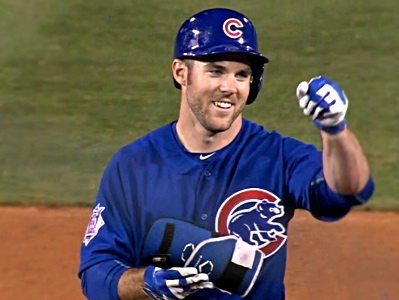 Last evening, there were some data points on the Texas Rangers’ interest in Chicago Cubs outfielder Jorge Soler, whose spot on the Cubs’ roster is tenuous – not by virtue of his ability and upside, but by the cold realities of a ridiculously stacked offensive core.

Soler, of course, is not the Cubs’ only right-handed hitting outfielder who appears to be squeezed out by the sheer roster density. There’s also Matt Szczur, who is out of minor league options (and thus must make the Cubs’ Opening Day roster or be subjected to waivers, which he almost certainly would not clear), and offers defensive versatility in the outfield.

Szczur had a solid year in a reserve role for the Cubs in 2016, though a late-season, BABIP-fueled slump ultimately dropped his season line to .259/.312/.400. Still, that, plus his defensive and baserunning value were enough to net him 0.7 WAR over just 200 plate appearances. I’m not saying you can quite extrapolate in this way, because he was match-up protected quite frequently, but that’s an average big leaguer over the full course of a season. As a bench guy, then, that has a fair bit of value. And if he were given more regular starts? Who knows. There is clearly a lot of latent power in that bat, developed over the past few years, and tons of athletic ability.

And, so, circling back to the Rangers, there’s this:

Have also heard that, in addition to Jorge Soler, Rangers are doing some checking on Cubs versatile OF Matt Szczur

To be sure, the return in a trade for Szczur would probably not be more than an upper level depth arm (though we know the Cubs want those) or a low-level, decent-upside-but-flawed prospect, because the lack of minor league options puts the Cubs behind the 8-ball, and other teams know it.

If there’s an opportunity to get a more usable piece or a decent prospect, while also giving Szczur more of an opportunity for regular playing time, then there’s little reason not to make a move.

… unless the Cubs want some protection against the possibility that they do trade Jorge Soler. In that instance, and if they also deal Szczur, the outfield depth goes from overflowing to “pretty good, as long as there are no injuries and John Andreoli isn’t taken in the Rule 5 Draft.”

Players in Szczur’s position are more frequently dealt, if at all, closer to Spring Training, so we’ll see if a team like the Rangers is actually aggressively pursuing Szczur, or if they’re just keeping tabs.