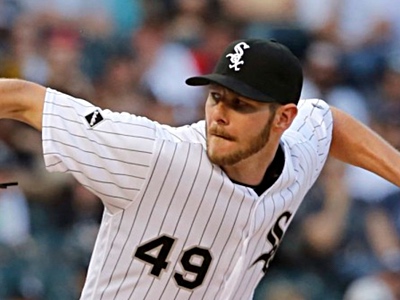 [See the Update below for the trade. Original post follows.]

This is your brief mid-day update on the Chris Sale trade talks, which we’re following not only because it’s really interesting and a big deal, but also because there will be downstream impacts to the Cubs one way or another, either by NL competition next year, or by changing the market for controlled starters.

It looked last night like the Nationals were getting close to a deal with the White Sox, but nothing was finalized. Since then, there hasn’t been much direct discussion of those talks, which doesn’t necessarily mean there’s a breakdown, of course – as I said this morning, it’s just necessarily going to be a complicated process of getting a deal together when the target is of this caliber, when the trading team has young players/prospects it will not give up, and and when the trading team also wants to acquire another notable player in trade (Andrew McCutchen).

But the Nationals’ failure to close the deal could have left a crack in the door for another team to swoop in:

Sources: #RedSox remain strongly in mix for #WhiteSox’s Sale, along with #Nationals.

Multiple sources now saying that #RedSox have built momentum toward a deal with #WhiteSox for Sale.

Red Sox have the most, best pieces for sale. They met yesterday with chisox. @Ken_Rosenthal says they're "strongly" in mix

Chisox asked for benintendi, as everyone has (bos wants to keep). Chisox likes Jackie bradley Jr. Very much, and others

It’s certainly true that the Red Sox would seem to have a wider range of tradable assets near big league ready, and perhaps they’re simply a better fit for the White Sox than the Nationals. This is interesting.

On the whole, you’d probably rather see Sale staying in the American League, rather than joining what would become a brutally tough rotation for the Nationals, a team that figures to be competitive at the top of the NL during the same short-term window as the Cubs.

We’ll keep following along, but it doesn’t sound like this is a one-horse race or anything:

Want to make this clear: #Nationals are not out on Sale. But #RedSox appear stronger at moment.

BREAKING: Sale to #RedSox. Moncada, Kopech and two other prospects to #WhiteSox.

The #WhiteSox will also acquire Basabe and V. Diaz from #RedSox

The implications here are many, including the fact that the Nationals now do not get the guy who was apparently their top target. What do they do next? Finish the deal for Andrew McCutchen? Go big on Aroldis Chapman or Kenley Jansen? Try to pull of a Chris Archer deal?

And how will the rest of the AL East respond, given this massive upgrade for the Red Sox?

UPDATE: Obligatory slow your roll, but this is still probably happening:

While several reports say Sale to #Redsox trade is done, one source says the sides are "still working'' through some final details.

It’s rare that you get to the point of all the names in a deal coming out from more than one reporter and then a deal not actually being completed. I suppose it’s possible there is still a medical review situation going on, and that could derail things. But that’s extremely rare when the reports reach this stage.