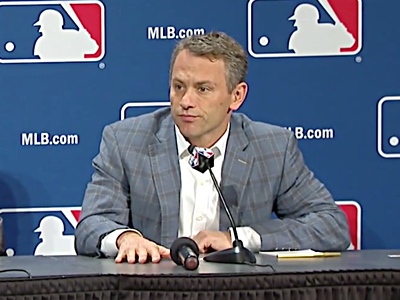 For the third consecutive Winter Meetings, the Chicago Cubs have made at least one significant move, today trading outfielder Jorge Soler to the Kansas City Royals for closer Wade Davis. For many thoughts on that trade the implications thereof, see our write-up here.

Among the items discussed …

Cubs had their training staff check out Davis personally today. Then signed off on the deal.

That’s comforting to hear, given Davis’s forearm/flexor issues last year. Teams do not have to permit trading partners to conduct in-person physicals like that, so it was good for the Cubs to ask, and appreciated that the Royals allowed it. The most recent MRI on Davis’s elbow is probably much more important than whatever they could glean from an in-person exam, but still. It’s more than you usually get in these deals.

Hoyer said, as you might expect, that the Cubs wouldn’t have done the deal if they didn’t feel very good about the state of Davis’s arm.

If there was any question about Davis’s role, let it be crystal clear:

Jed Hoyer said Wade Davis is the closer. Rondon must once again try to set up with Strop and Edwards .

Hopefully the bulk of Hector Rondon’s struggles last year after the Aroldis Chapman trade were attributable to his triceps issue, and not to his role change. If Rondon can be Rondon – and if Pedro Strop and Carl Edwards Jr. can be what they have been – then the Cubs will have four right-handed closer-like dudes to pitch the late innings next year.

Hoyer also noted that the Cubs are all too aware that a lengthy postseason run can wear a staff down, and show up the next season – so adding an arm like Davis’s is all the more important.

And also, they’re not done:

Hoyer said #Cubs are "not done adding pieces to the bullpen."

As presently constructed, the Cubs’ bullpen (sans Mike Montgomery, who currently slots into the rotation) features Davis, Rondon, Strop, Edwards, and Justin Grimm as locks, and then a group of many others who could contribute, including newly-signed lefty Brian Duensing, Felix Pena, Rob Zastryzny, and Jack Leathersich.

You would very much like to see the Cubs still add an arm from the Greg Holland/Koji Uehara/Brad Ziegler/Jerry Blevins tier of relievers out there, and perhaps also bring back Travis Wood, depending on the cost.

Otherwise, the “bullpen” move the Cubs could make would be to add another starting pitcher, and keep Montgomery in the bullpen.

As for Soler and the Royals, the expectation is that he’ll play in right field and DH. Hopefully he has years of success.