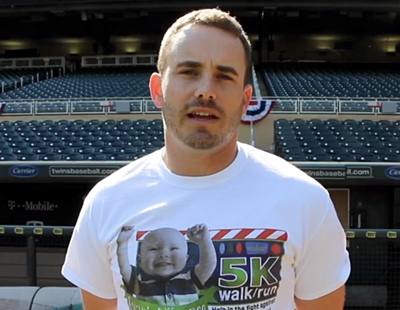 The Chicago Cubs went out and made their big bullpen acquisition last week when they traded Jorge Soler to the Kansas City Royals in exchange for Wade Davis.

But before that deal went down, they added a (nearly) 34-year-old lefty by the name of Brian Duensing.

Duensing came up as a starter through the Twins organization, making his Major League debut in 2009. After mostly failing as a starter for four straight seasons, he was moved into the bullpen (as many are) and found some success as a reliever.

With the Cubs adding Duensing to be a part of their bullpen (depth or otherwise), we’re going to take a look at his stats from 2013 on (i.e. the relevant ones). But before we get to any of that, let’s get to know Duensing as a person, because he’s actually a pretty interesting guy.

Below, you’ll find a relatively tame “Now You Know” style piece where Duensing gives some background on his life. After that, however, you should see what else he’s done over the years. For example, you can tune into his “Pen Pals” series (in which he tried to prove that he and fellow Twins pitcher Aaron Thompson are not weird), laugh as he performs surgery with Brian Dozier, and laugh some more as he plays a charades style iPhone game on the Winter caravan.

In addition to the jokes, Duensing has also won the 2014 Carl R. Pohlad Community Service Award, stood up to Childhood Cancer, and did the ALS ice bucket challenge.

You can also read an interview with Duensing at FanGraphs from this past summer, where he talks about life in baseball, about his first crack at free agency and the minor league offers it produced, deciding how and when to opt out of minor league deals, and more. Duensing seems like a positive, thoughtful guy.

I know this may all seem inconsequential, but the Cubs front office has repeatedly targeted players they think will help the Cubs on the field, in the clubhouse, and in the community. To that end, it would seem, Brian Duensing is a perfect fit.

And now we can get into the stats.

As a left-handed reliever, Duensing (unsurprisingly) performs leagues better against fellow southpaws. For his career against lefties (141.1 IP), Duensing has allowed just a .277 wOBA against (as a reliever and against left-handed hitters) and a 2.67 ERA. His strikeout rate over that stretch increases to 20.5%, his walk rate decreases down to 6.4%, and his ground ball rate moves up to 47.8%. All of which support an excellent 2.87 FIP. As a LOOGY, then, I have confidence in Duensing’s ability to succeed.

Over the course of the offseason, the Cubs have lost lefties Aroldis Chapman and Travis Wood (presumably) to free agency, and may yet lose lefty Mike Montgomery to the rotation. They did pick up Caleb Smith in the Rule 5 Draft and (are close to picking up) Koji Uehara from free agency (who is actually a righty, but has been historically tougher on lefties), but the former might not make the roster, and the latter is almost 42 years old. So, picking up some additional, veteran, and left-handed depth like Duensing was probably a prescient move.

Although he’s signed to a big league contract (reportedly for $2 million), the deal is not so significant that, should the bullpen shake out differently in the coming months (and through Spring Training), the Cubs could not move on if need be.

That said, with the Cubs expected to carry eight relievers, and with a guy or two always getting hurt by the time the start of the season rolls around, it’s fair to plan on Duensing being in the pen for 2017 as the Cubs’ primary LOOGY.