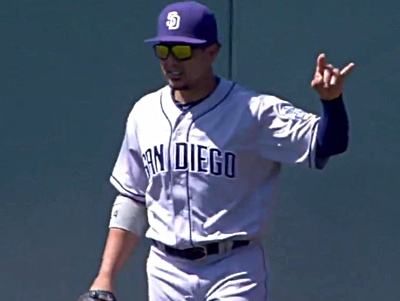 In case you missed it somehow preceding Dexter Fowler’s departure for the St. Louis Cardinals, the Chicago Cubs signed long-time Cardinal (and short-time Padre) outfielder Jon Jay to a one-year deal worth $8 million.

Presumably, he’ll split time across all three outfield positions, primarily sharing center field as the left-handed half of a less-than-strict-platoon with 22-year-old righty Albert Almora Jr.

Broadly speaking: Jay has been a slightly above average offensive and defensive performer throughout his six and half year long Major League career, and is making less than half of the qualifying offer rate. I can dig it.

But there’s obviously much more to explore than that. Although he’s been a slightly-above average bat throughout his career, Jay did go from a 115 wRC+ in 2014 to a 57 wRC+ in 2015, before splitting the difference (100 wRC+) last season. But to be sure, it’s not much of a mystery, as most of that drop off can be explained.

In the offseason preceding 2015, Jay had surgery on his left wrist, which did not heal completely and reportedly affected his ability to hit. That injury forced him to miss about three weeks in May, and all of July and August. From there, he only had 54 plate appearances before the end of the season, which is obviously not much of a sample, so I think we can mostly attribute his 2015 struggles to the wrist.

Unfortunately, that’s not the end of his injury history.

In the December preceding the 2016 season (so, last winter), the Cardinals traded Jay to the San Diego Padres in exchange for Jedd Gyroko (who promptly had a career year at the plate, because obviously). But after slashing a productive .296/.345/.407 (106 wRC+) in his first 290 plate appearances, Jay broke his forearm on June 19 and was later placed on the disabled list all the way until September 6.

Neither injury is particularly telling of an injury-prone player, HOWEVA, injuries to the arm and wrist can be worrisome for the offensive ability of a post-30 position player going forward.

Suddenly, you may understand how a center fielder with a career 106 wRC+ and fine defense was able to secure only $8 million in a one year deal.

For example, Jay has hit righties very well throughout his career. In 2066 career at-bats against righties, Jay sports a 108 wRC+. But, he isn’t just a run-of-the-mill hits-righties-only guy, either. For his career, Jay has been a precisely league-average hitter against lefties (100 wRC+), and actually sported a 111 wRC+ against southpaws last season.

So in the end, I think that’s what you’re most likely to get with Jay. Even at age 32 next season(coming off an injured season), I think it’s fair to count on him to hit for a solid average, an okay on-base percentage, and a slightly below average slugging percentage in 2017. He’ll probably walk a bit less than average, but he’ll strike out a lot less, as well. He’ll hit righties better than lefties, share time with average defense in center, left ,and right field, and be a solid option off the bench.

Of course, the front office is also hoping that he can add value in the dugout, as well (particularly with Almora’s expected growth in center field).

“From a makeup and leadership standpoint, he’s got an off-the-charts reputation,” Jed Hoyer recently said of Jay, per CSN, adding that he’s hoping Jay can help to fill the void left by David Ross.

At CSN Chicago, Patrick Mooney writes about how Carlos Beltran played a mentor role in Jay’s early career, and how it proved to be invaluable to his development. And Jay seems to be on board with playing a similar role on the Cubs: “I’m looking forward to doing that with Albert [Almora] and helping him be the best player he can.”

These sort of additional motivations for a signing aren’t always completely understandable or visible to fans, but I think we all saw how much a guy like David Ross (and hopefully Jon Jay) can add to a team off the field and in the dugout.

And hey, if he happens to help out with the stick and the glove, too, well, that’d be great, too.