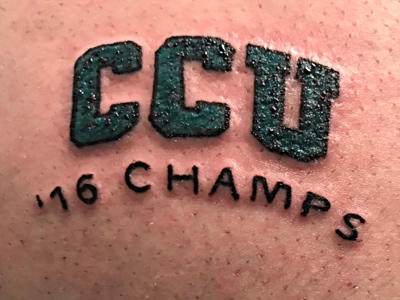 Jake Arrieta once told Pittsburgh Pirates fans who planned to try to shake him in the 2015 Wild Card Game that they could do whatever they wanted, but it wasn’t going to matter. He then threw a complete game shutout.

A man of his word.

So when Arrieta and teammate Tommy La Stella made a tattoo bet when their alma maters, TCU and Coastal Carolina, met in this year’s College World Series, you knew Arrieta was good for it when his Horned Frogs lost.

Not ideal.. but a bet is a bet. pic.twitter.com/CE6DDWsUei

Now, we can’t see Arrieta in the shot, and the mind immediately begins to imagine just where that tattoo lives, but it is assuredly now a permanent part of his body. It doesn’t look too bad, but then, it’s not his college, either.