Remember When Javy Baez Walked the Cubs Off in the 13th Inning on Mother's Day? Skip to content 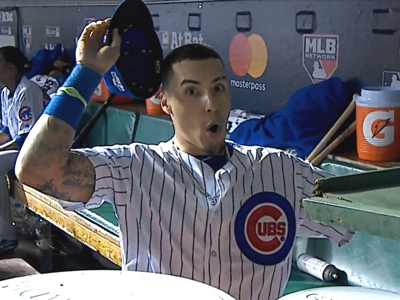 The Cubs didn’t have too many walk-off homers in 2016, but I’m pretty sure I know that everyone remembers one from May. It was actually the team’s first walk-off win of the year.

The Nationals had come to town in a rather highly-anticipated match-up between two teams that figured to be in the playoff race deep into the season. But then they left town after a total thud of a series, which saw the Cubs sweep the Nationals in four straight, including a thumping of eventual Cy Young winner Max Scherzer, and a hack-a-Shaq approach to walking Bryce Harper that intro’d a spiral to his season from which he never fully recovered.

Sunday’s finale of that series was Mother’s Day, and, decked out in appropriate garb, the Cubs came back late on a two-run Kris Bryant single to tie the game in the 7th inning. From there, the teams dueled for five more scoreless innings, until the bottom of the 13th inning.

That’s when Javy Baez did the thing:

Our first #walkoff win of the year, courtesy of @javy23baez! #LetsGohttps://t.co/idZ71vc53V

Javy Baez busts out the Sammy Sosa hop on his walk-off homer. pic.twitter.com/hITCFhO00n

That’s an extra-inning walk-off bomb to give the Cubs a four-game sweep. Does it get better?