Remember the Crazy Win Against the Cardinals with a No-Look Hit, Face Tags, and a Shrimp? Skip to content 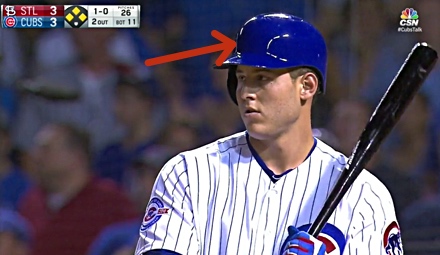 The Chicago Cubs had some crazy wins throughout 2016, from the surprisingly satisfying home opener to the marathon game in Milwaukee to the utterly bonkers comeback win against the Mariners at the end of July to the sublimely cathartic Game Seven win to finish it all off. There are many more. We’ll touch on them all in time.

The Cubs won the game 4-3 in the 11th inning when Anthony Rizzo stood in for a bases-loaded, walk-off walk (otherwise known as a shrimp), even though the pitch was maybe not-so-much a ball:

About that plate appearance:

You knew something crazy had to happen after Anthony Rizzo took his at bat with no C on his helmet. (Walk-off walk.) pic.twitter.com/JHbQ7y4N4U

Aroldis Chapman pitched a scoreless 9th inning in the game … on three pitches:

Two of the game’s holy-crap moments (well, two and a half) came courtesy of catcher David Ross, who busted out the Jake Taylor special by bunting in the Cubs’ third run of the game:

And Ross also saved a couple runs, with both incidents involving tags to the face. There was a pick-off at first base that came just before a homer:

And then a firm tag to Matt Carpenter’s face at the plate following a brilliant field, throw, and relay from Chris Coghlan and Addison Russell:

If you just want to watch Cardinals players getting booped on a loop:

But it’s the other crazy moment from the game – the first – that I remember best. The Cubs were down 2-0, having done a whole lot of nothing against starter Carlos Martinez, when it looked like he would wiggle out of a bases-loaded, two-out jam. Chris Coghlan was in a full count, and asked for time as Martinez went with a quick pitch. Coghlan’s request was not granted, which you’d think means he’s screwed, but … NOPE:

That’s just amazing, and is pure muscle memory and body reaction. I mean, just look at this picture and know that this somehow turned into a line drive single to right field:

Been writing about this game this morning … and I love it. One of my favorites. pic.twitter.com/KjPDiJ2w1l

Ah, yes. What a game. I appreciate it even more now that I looked back and remembered just how crazy it was.