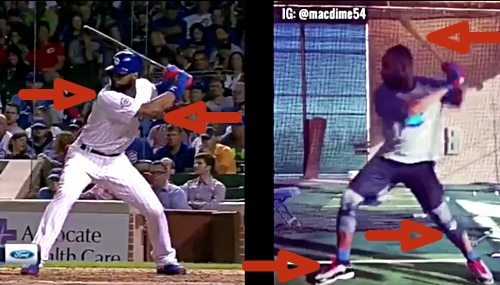 There’s little fertile ground about Jason Heyward’s 2016 season with the Chicago Cubs that hasn’t already been so well-travelled that grass there will never grow. He played impeccable, Gold Glove defense. He instantly became a respected and important voice in the clubhouse. And he didn’t hit a lick.

The vastly more interesting and important discussion going forward centers on whether the guy we saw at the plate last year is going to be the guy we see next year and beyond. Michael recently built the optimistic case for an offensive revival, and we know that the big right fielder is already in Arizona working on his swing.

In fact, over night, Cubs mental skills coordinator Darnell McDonald posted a video of Heyward working on that swing on his Instagram:

To be sure, there’s only so much you can take from a batting practice swing in December – reworking a swing is a process, after all – but it’s clear there are some significant changes.

Corey Freedman put together a quick side-by-side with a swing from this past season:

@WhatTheMicah @DEvanAltman best I can do rn. Hard to find a longer side angle from 2016 showing full swing/load. pic.twitter.com/NbNK4E4WzJ

I took a screenshot at the moment Heyward begins to accelerate into his swing to point out some of the more obvious differences:

I am not a swing technician or a scout, mind you, so I speak to you only as a dude with eyes who has seen a lot of baseball. The angles aren’t perfectly on point with each other, but I still think there are a number of things that immediately jump out in the new swing: Heyward’s hands are in tighter, which leaves the bat more vertical and his elbow bent and closer to his body; Heyward’s lead shoulder is slightly more open, which, together with the hand position helps create a quicker path to the ball; Heyward’s lower half appears to be more open in his right leg, and slightly rotated forward in his left leg, yielding an overall more open approach. It would seem that staying open a little longer could allow Heyward to better get his hands in on pitches on the inner third.

You also undoubtedly noticed the lower, almost Rizzo-like hand position before Heyward starts his swing. That ever-evolving aspect of Rizzo’s swing was designed to make him quicker to the ball, for what it’s worth.

The long story short on all of this is not to analyze in-depth this four-second video of one Heyward swing in the cage. Instead, it’s only to get us started thinking about these things (it’s rightly going to be a huge topic of conversation in the spring), and to point out that Heyward is clearly already getting after it. If you’re going to rework a swing, now is the time to do it, because you’ve got to build in so much muscle memory in order to get those changes to actually take hold when the season rolls around. Good on Heyward.