Remember When Jason Heyward Drove in Every Run, Tying It in the 9th, Walking It Off in the 13th? Skip to content 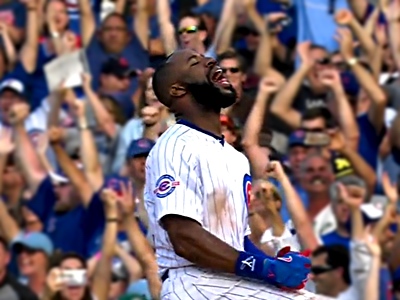 As we’ve discussed at length recently, it was not a great offensive year for new Cubs signing Jason Heyward. Whether it was swing mechanics getting out of whack, the added pressure of a huge contract, a lingering physical issue, or some combination of everything, Heyward posted by far the worst offensive season of his career. Given Heyward’s positive attitude and obvious hard work, it was hard to watch, and harder still to deal with the cacophonous throng of a certain segment of the Cubs fan base losing patience.

Moreover, there were not even many positive individual offensive moments to which to point and remember fondly, “Well, at least there was that.”

But there’s definitely at least one great offensive moment from the season for Heyward, and it was one that felt like such a relief, given how the year had played out.

The Cubs were hosting the Giants at Wrigley Field in early September, and it had the feel of a playoff series – which, given the NLDS, was prescient. Not unlike the NLDS, the Cubs won the series 3-1, and the final win came in the final inning of the series.

So much joy and relief in the faces of Heyward’s teammates, who were undoubtedly happy to win the game, but happier still for Heyward. He needed that. It’s a good memory.

That was also the first time in 26 years that a Cubs player had tied the game in the bottom of the 9th, and then later walked it off (Andre Dawson, 1990).

Here’s hoping there are many more huge moments for Heyward in 2017 and beyond. He’s currently in Arizona working on his swing, and I’m looking forward to seeing the fruits of that effort in a few months.

Bonus fun fact about that game: it was the game after which Johnny Cueto busted out one of the best lines of the year, saying that he hoped to see the Cubs again in the playoffs, because that’s when you find out who has the coconuts. (Javy has the coconuts, Johnny. It was Javy.)