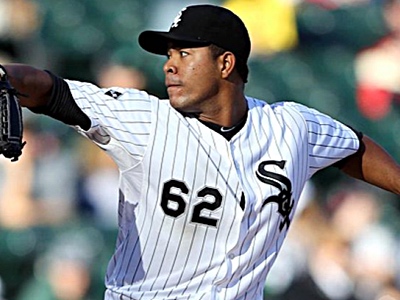 Well, this would certainly be a potentially huge trade:

The Pirates have worked hard to try to make a trade for Jose Quintana, whose modest contract is perfect for their budget size.

The Pirates, who recently signed reliever Daniel Hudson to a two-year deal, did not ultimately trade Andrew McCutchen at the Winter Meetings, and now instead look poised to try to hang around at the top of the NL Central for the next couple years. Adding Jose Quintana, at a great prospect cost, would obviously increase the near-term competitiveness dramatically.

Quintana, 27, has been quietly and consistently excellent going on four years straight, and has one of the most appealing pitcher contracts in baseball: $6 million this year, $8.8 million in 2018, $10.5 million club options in 2019 and 2020 ($1 million buyout). Adding him would make a huge difference for the Pirates over the next few years.

The cost, though, as mentioned, would be very significant. The Pirates have the prospects to pull it off, without question, but the types that the White Sox will want are the very types that the Pirates need to keep their competitive window going for a nice long while – in other words, the Pirates would probably have to consolidate a lot of their near-term young pieces into just one impact piece in Quintana. There is less volatility in an established big league star than in prospects, but the injury risk is then entirely in one arm. And the Pirates won’t have the financial ability to clean things up if they sell off the farm for Quintana and then he breaks.

Considering all of that, a Pirates trade for Quintana is an extremely big bet on the next three or four years. The Cubs figure to be very good during that stretch, but perhaps not the rest of the NL Central. Maybe it’s a good time for the Pirates to pull this kind of trigger?

Olney’s tweet doesn’t indicate anything is close, so we’ll keep monitoring. But this sure is interesting to think about. If the White Sox are serious about shopping Quintana, the Pirates won’t be the only team making a serious run. Already, various rumors have connected the Yankees and Astros to Quintana.