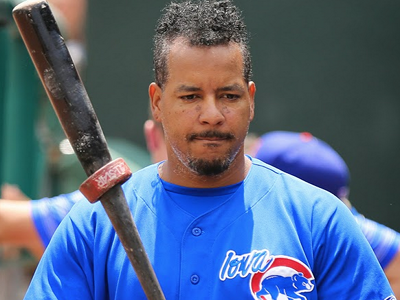 After crushing in Spring Training (.311/.377/.556 with 3 home runs and 10 RBI), Ramirez headed into the season looking like he might be ready to help a team again. Unfortunately, after consecutive failed drug tests, Ramirez retired just five games into the season.

That was the last time he ever played in the Major Leagues.

But, as Cubs fans know, it wasn’t his last time playing. Since 2011, Ramirez has attempted multiple comebacks. In 2012, he joined the Oakland A’s minor league system, in 2013 he played in the Dominican Professional Baseball League, before later attempting to make his way through the Texas Rangers system.

Then, of course, Ramirez began his career as a player-coach with the Chicago Cubs’ Triple-A affiliate in Iowa in 2014.

And guess what? He’s not done yet.

The 44-year-old 12x All-Star, 9x Silver Slugger, and 2x Hank Aaron Award winner will attempt yet another comeback next season (Yahoo Sports). According to Manny’s wife, Juliana Ramirez, Manny is working hard and training to make a comeback as soon as possible. “He is training extremely hard … Batting, CrossFit, Orange Theory. He never stops.”

You can even see him take some cuts in the batting cages here.

It’s not certain that a team will be willing to take a shot on Ramirez (even on a minor league deal), given how long he’s been out of baseball, but then again, Tim Tebow is currently in the Mets organization, so what the heck, right? There are some rumors that he has interest from an international team (in other words, not an MLB-affiliated organization), but it’s unclear if that’s what he’s looking for at this point in his career.

During his time with the Cubs, Ramirez drew rave reviews for his work as a batting consultant, especially with younger Latino players, and for his ability to draw on past mistakes for instructive purposes. So, as a coach, I’d imagine he’d have no trouble finding work.

But if he can really find a taker as a player, I think we could all appreciate seeing him back on the diamond for one last hurrah.

For what it’s worth, it doesn’t sound like it’ll be with the Cubs, though:

Haven't heard any rumblings about Manny coming back. So, I'd be pretty surprised to see him back with the I-#Cubs. #MiLB