Remember When the Relievers Played the Outfield and Javy Baez Hit a 15th Inning Grand Slam? Skip to content 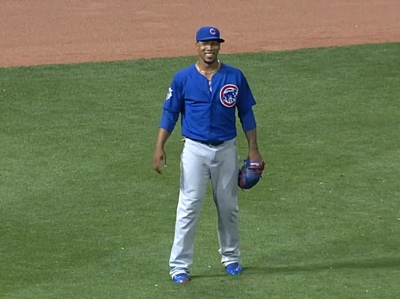 When you’re in the midst of a given season, you might recognize a crazy game here and there, but it’s not until you’re stepping back – like I have been over the past couple weeks – and perusing the season as a whole that you realize there are so many crazy games and moments to get into. I love it.

For example, a stray 7-2 win in late June against a hapless Reds team might not look like much on paper. And then you see that the game went 15 innings, and you think, oh, well that’s pretty interesting. Five runs in the 15th inning to win a game? You don’t see that too often.

But that’s nothing. Sure, any time a game goes 15 innings, it’s going to be a little nuts, but THIS is how crazy that game actually was:

Good morning. Reporting for duty. (And using this GIF momentarily at BN … ) pic.twitter.com/SCtc4JdTdk

Yes, that’s Pedro Strop playing left field, where he played for the entire final inning of the game.

The Enhanced Box Score from the game sums up the madness:

In short, the Cubs ran out of position players by the 12th inning, and then also went down to just seven position players in the field, requiring the use of relievers as outfielders – Strop was not the only one out there, as Travis Wood and Spencer Patton also saw time in left, bouncing back and forth with each other:

And when it looked like the Cubs might head into the bottom of the 15th inning with a slim lead thanks to an RBI single by Kris Bryant, Javy Baez made dang sure that, whoever was going to have to play left field, the game was over:

Ballgame. The win was part of a three-game sweep in Cincinnati, which immediately followed a 1-6 stretch, and immediately preceded a 1-9 skid just before the All-Star break. Playing 15 innings on the road probably didn’t help, eh?

Random bonus from that game: Anthony Rizzo made another tarp catch. No, it wasn’t as dramatic and spectacular as the other TWO tarp catches in his career, but impressive nonetheless.