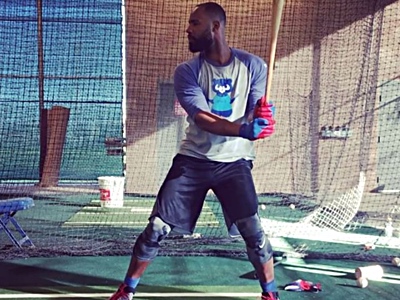 Cubs Mental Skills Coordinator Darnell McDonald is the man, presumably for many reasons, but for today, I give him the love specifically for hooking the world up with Jason Heyward swing videos.

Given Heyward’s disastrous 2016 season at the plate and complicated swing mechanics, there hasn’t been a more anticipated re-working of a swing since Javy Baez post-2014. Yes, we are huge baseball nerds.

Earlier this week, McDonald popped a Heyward swing up on Instagram, and we had some fun lightly deconstructing the obvious swing differences.

McDonald has another couple short videos of Heyward’s swing for your enjoyment. The first:

Again, as I noted earlier in the week: this is just batting practice, it’s literally just one swing, and I’m not a scout or a swing technician. But again, it’s easy to see the differences, as both the bat and Heyward’s body stay much more upright, the starting hand position is night and day lower, and the front foot looks a bit more open. None of this means much of anything until we see it employed in game action and see if Heyward’s muscle memory has been re-trained (and see if the new swing actually generates improved contact), but no one’s going to be able to say that the guy wasn’t working hard in the offseason to address last year’s issues.

It can’t all be grinding away, though, right? Gotta have a little fun:

While I don’t think the run-up-to-the-pitch approach would be particularly effective or legal, that doesn’t mean it’s not fun to watch. And it’s also possible that there are reasons it actually helps with the re-working of the actual swing.