You Showed Off Your #WinterCubsFan, Here Are the Six Finalists - VOTE NOW Skip to content 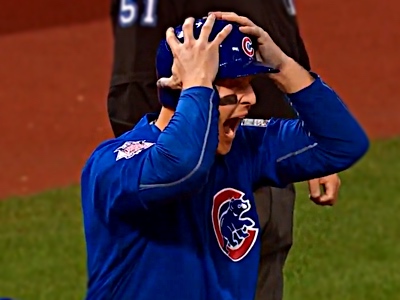 As you may recall, we’ve been running a contest to win a free copy of The World Series Film, and in the process, you fine folks showed off how you’re getting through the offseason as a #WinterCubsFan. I’d encourage you to peruse that hash tag on Facebook and Twitter to see the great pictures people sent out. It was an incredible collection, and made selecting six finalists really tough!

The six finalists are below, and the three winners will be chosen by who gets the most upvotes in the comments on this post (so it’s one vote per person). I’ll create a comment for each of the six finalists below, and you can pick your favorite with an upvote. If there is a tie for any of the winner spots, Michael and I will break the tie. Voting goes through the holiday weekend, and winners will be announced on Monday.

W the Snowman is still celebrating the WS win! While he parties in the yard, we watch game 7 again inside. @BleacherNation #wintercubsfan pic.twitter.com/g37vh3wHBs

Spending the winter doing some arts & crafts. Putting together all 7 of my WS game tix and fav pics & reading @BleacherNation #WinterCubsFan pic.twitter.com/mA3axIgSj9

@BleacherNation Making my own ornaments for my Cubbies tree!! #WinterCubsFan pic.twitter.com/4P6VinZbj5