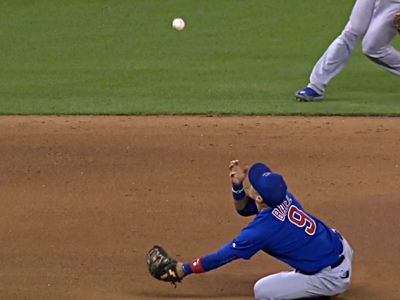 When I say that Javy Baez is one of the most impressive defensive players in baseball, it should be no surprise to anyone.

I won’t even attempt to link back to the dozens of highlighted defensive plays he’s made over the course of the regular and postseason, because there are simply too many (seriously, go type “Baez,” into the search box and Bleacher Nation and see what comes up).

That said, his defense never really received the type and amount of attention it deserved until it was on display at the national level in October.

He did take home the Fielding Bible award for best multi-positional defender, but missed out on (as in, wasn’t even a finalist) the NL Gold Glove Award at second base, primarily because he didn’t have nearly as many defensive innings there as any of the other finalists.

But even with far fewer innings at second, Baez may have been the most valuable defender at second base, overall, in 2016.

Consider one particular comprehensive defense statistic, Defensive Runs Saved (DRS), which you can read about here at FanGraphs. DRS is a statistics used to rate individual defenders as above or below average. In other words, it’s one single number (measured in “runs” above or below average (average being 0)), used to capture a player’s total defensive value. Although it’s not exactly a counting statistic (like home runs, for one example), since it can go down, it’s not exactly a rate statistic either. Point being, a good defender (like Baez) would likely see his DRS continue to rise, given more and more opportunities (innings).

Keep that in mind when I show you the DRS leaders across all of baseball, with their inning totals at second base in parenthesis:

Yup. You’re reading that correctly. Despite having about 1,000 (one freaking thousand) fewer innings at second base, Javy Baez had the third highest DRS in all of Major League Baseball. Moreover, he led the National League by by three full DRS. That’s just, inhuman.

Prorated out over the course of 1,300 innings (like the two leaders ahead of him), and he would have a DRS of 37! For some perspective on just how utterly insane that is, FanGraphs defines DRS like this:

Given a full season worth of innings at second base (assuming he didn’t get any better or appreciably worse) Baez would have posted a DRS more than double that of an expected Gold Glove winner.* Mookie Betts posted the highest DRS in all of baseball this year, and he finished at 32 by season’s end.

We know there are still adjustments to make at the plate for Baez, but the defense may already be elite.

*(Brett: Your obvious huge caveat here is that the sample is extremely small, and it’s always dangerous to extrapolate too much from a small sample of advanced defensive statistics. Spreading the number out over a full season here is mostly just for fun. The main statistical point here is to focus on what Baez *actually did accomplish* in the limited innings he was given. No one is saying he would definitely have continued that pace for a full season, or that he would do this again next season over a full slate of games. It’s just fun – and crazy impressive – to see how good he was.)