Remember When Kyle Hendricks Dominated the Dodgers to Send the Cubs to the World Series? Skip to content 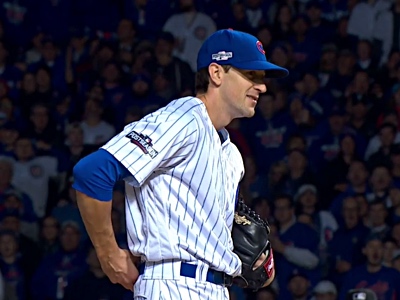 A win away from the World Series.

Cubs lead. Starter cruising. And then a hit.

If you shifted uncomfortably at that moment, I can assure you that you were joined by 40,000 at Wrigley Field, myself included. There are ghosts in that place.

But Josh Reddick’s one-out single in the 8th inning of Game Six of the NLCS mattered little, as Joe Maddon brought in Aroldis Chapman, who finished the game out, and the Cubs were off to their first World Series in 71 years.

And the performance that got them there, with all appropriate respect to Maddon, Chapman, and the offense, was the dominating start by Kyle Hendricks.

Continuing a season where he’d broken out, much to the befuddlement of pundits everywhere, Hendricks dismantled the Dodgers in one of their most important games in decades. That Reddick hit was just the second Hendricks had allowed all night – a book-end to the other hit he gave up, which came on the first pitch of the game. In between, Hendricks struck out six, kept the ball in the infield, and didn’t so much as allow a runner to reach base, except for Reddick on an error. And, of course, Reddick was subsequently picked off by Hendricks.

The performance netted Hendricks a game score of 86, which was not only the highest by any Cubs pitcher in the postseason, it was the highest by any pitcher in any postseason game the Cubs were involved in. Moreover, it was the highest game score by any Cubs pitcher all season, with the sole exception being Jake Arrieta’s no-hitter in Cincinnati back in April. Given the situation, you could argue Hendricks’ start was the biggest and best of the Cubs’ year, and I don’t know that too many would argue with you.

Enjoy the highlights of Hendricks’ performance, and the standing ovation he received as he left the game with five outs to go. History was made, and history awaited: