The Cubs Have Two of the Best Second Basemen in Baseball ... Kinda Skip to content 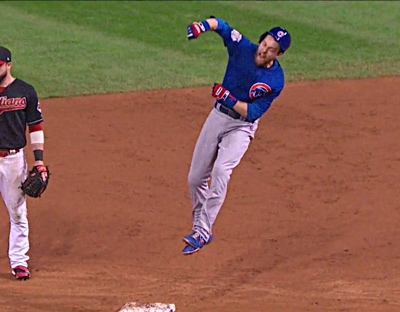 If you were around last week, you’ll know that we’ve been following Buster Olney’s (ESPN) positional rankings here at Bleacher Nation, noting you not only of their arrival, but digging into the Cubs-related components.

Today, we’re going to take a continued look at his positional rankings, with a dive into the top second baseman in Major League Baseball.

Uniquely – as the title hints – the greedy Chicago Cubs may actually have two of the top second baseman in the league. But before we get into the specifics of that, here are the overall results, with Olney getting input from evaluators around the game:

In stark contrast from the first basemen rankings, the American League owns the top of this board and it’s hard to argue with the top three. Jose Altuve, for example, might be one of the very best, most exciting players in baseball. Since making his Major League debut in 2011, Altuve has made four All-Star teams, including each of the past three. On top of that, he’s won three Silver Slugger awards, a Gold Glove, and was a finalist for the AL MVP in 2016. I think he is, without a doubt, the best second baseman in baseball. (And arguably on baseball’s most team-friendly contract, too.)

And then there’s Robinson Cano, who may have escaped the national spotlight a bit after signing with the Mariners, but still presents an interesting case. After the 2013 season, the Mariners handed Cano a massive 10-year, $240 million contract (tied for the fifth biggest MLB contract of all time) at the age of 31. At the time, that contract really felt like one of those “oh this is gonna be trouble,” deals, but Cano hasn’t really slowed down. In the three seasons since signing, Cano has put up 13.3 WAR, made two All-Star teams and finished in the top ten of MVP voting twice. I’m not sure he’ll be able to keep this up forever, but so far so good.

Number four on the list, Daniel Murphy, had a career takeoff during the 2015 postseason (much to the chagrin of Cubs fans everywhere) and kept up that pace in 2016, when he came up just shy of the batting title. Former Cub DJ LeMahieu (infamously traded to the Rockies alongside Tyler Colvin for Casey Weathers and Ian Stewart, in what proved to be one of the few oopsies of the Epstein-Hoyer era) has been fantastic in recent years, and, at just 28 years old, could still be good for a while longer.

But enough about everyone else, let’s get to the Cubs.

Number seven on the list is the 2016 World Series MVP, Ben Zobrist.

Zobrist, of course, came over to the Cubs before the 2016 season, put up 4.0 WAR, became an All-Star, and provided, probably, the biggest hit in the history of the Cubs’ organization. His professional approach at the plate, versatile defense, and leadership in the clubhouse has provided a calming presence in the Cubs order, and he’ll once again be a huge part of the Cubs next season.

But at which position?

According to Olney, Zobrist would have actually ranked higher on this list if it weren’t for his knack of moving around the diamond. Although he started most of his games at second base during the 2016 regular season, the postseason was quite a different story (all of his starts came in the outfield). Although Zobrist is certainly a well-known and respected player – especially now – Olney’s conclusion might be a pleasant surprise: “Zobrist has never hit .300 in his career, he has never scored 100 runs, and he has never won a Gold Glove Award. But over the past eight seasons, only six players in the big leagues – just six – have fared better in wins above replacement than Zobrist’s 41.1 ….” Wow.

But like we said, Zobrist didn’t play any second base in the playoffs and might not play there as an every-day regular in 2017. Why? Well, that’s because of a young Chicago Cubs who requires a category of his own: Javy Baez.

In each of the three previous installments, Buster Olney has included the top ten players at each position, plus a few stray honorable mentions. When he got to the second basemen, however, he had a category specifically for Javier Baez: “It’s hard to know what to do with a player who might be the best defensive second baseman in the majors, because he doesn’t always play second base.”

With those comments, Olney hits on a very serious, interesting, and awesome truth about Javy Baez – one that we addressed recently. Despite appearing in about 1,000 fewer innings at second base last season, Javy Baez led all NL second basemen in Defensive Runs Saved:

Baez’s depth chart projections for next season project a slight improvement up to a 95 wRC+ (and ZiPS projects a 96 OPS+), which, when combined with his truly elite defense at second base and fantastic base running, could yield a 3.0+ WAR player.

Of course as we know, Baez can also improve at the plate, and given his trajectory, skill set, work ethic and baseball instincts, I don’t know if that’s much of a long shot. Baez’s bat holds nearly as much upside as any hitter on the Cubs, and if he realizes that potential, he may find himself much further up on this list when 2018 rolls around.