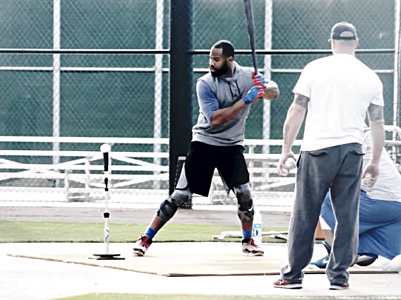 In the Cubs’ world, Jason Heyward is known for a few, very specific things.

First, his speech during the rain delay in the extra innings of Game 7 is something that’ll probably be remembered forever.

And whenever that movie finally comes out – there’s actually rumors that Kevin Costner might already be working on it (which would be an hilarious joke, if it weren’t actually true) – that’ll certainly be the Oscar-worthy scene.*

Second, his truly elite, Gold Glove award-winning defense in right-field was not lost on anyone, even with the struggles at the plate. Third, well, the aforementioned struggles at the plate certainly defined his first season with the Cubs. And finally, Jason Heyward is known by Cubs fans for his all-around makeup, hard-work, and sportsmanship.

Despite a truly horrific year at the plate, Jason Heyward was never once the guy hanging his head, complaining, or making excuses. And although he ranked among the bottom five in offense from qualified players (72 wRC+), the combination of his defense, base-running, and general baseball aptitude (not unlike Javy Baez) kept him as a positive value, overall player (1.6 WAR).

But all of the nice things aside, he, the Cubs, and we all are certainly hoping for a much better year at the plate in 2017. And, as expected, Heyward has long been putting in the work. As discussed earlier this offseason, Jason Heyward bought a house in Arizona, so he could rework his swing throughout the winter, with the Cubs’ hitting coach John Mallee and assistant hitting coach Eric Hinske. He’s also been working with Cubs Mental Skills Coordinator Darnell McDonald.

After a few weeks there, some video started to come out on his apparent swing changes, and today we have one more to share with you thanks to Tim Sheridan, who blogs at Boys of Spring and is the Cubs’ PA announcer in Mesa (there is loud music, so maybe turn down the volume if you’re at work):

I’m not going to even try to analyze his swing there, because first, and most importantly, I’m not qualified to do so. But secondly, we can’t even be exactly sure what he’s working on. Obviously in that video, alone, we see a series of different stances, swings, hand placements, and body movements, including the “Happy Gilmore” swing at the beginning.

The one thing we can definitively take away from this video, however, is that Heyward is a man of his word. There he is, in the middle of January, very seriously working out in Arizona with the Cubs coaches. We may too often throw around the “good makeup” tag on players, but it appears to be especially accurate for Heyward. Despite receiving the biggest contract in Cubs’ history, he is working as hard as anyone.

Back in December, I made a statistically optimistic case for Heyward’s offensive resurgence in 2017, and as long as we keep seeing videos of his offseason work, I’m comfortable standing by everything I said. Not many players with talent and a good work ethic struggle for long. Heyward has both. It’s an uphill battle, but he’s got what it takes. So let’s bring on 2017.

* Unless Jimmy Fallon is in it again, then, well … (I actually love this movie).