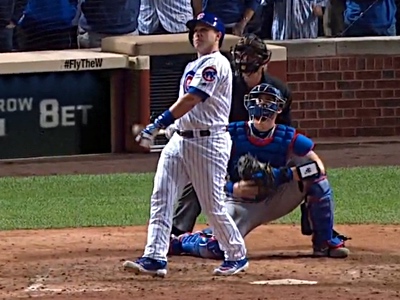 If I’m being honest, it was probably the game for which I was most nervous, at least until Game Seven of the World Series.

So, when the NLCS against the Dodgers began, I felt much more nervous than I did when the World Series began. Or even later on in the NLCS, when I felt good about the Cubs’ chances. Or even in the middle part of the World Series, when I’d convinced myself I was going to be OK either way.

Game One of the NLCS. I was just so nervous, man.

But by the time the Cubs had built a 3-0 lead and Jon Lester was cruising, I’d settled down considerably. I mean, Javy Baez stole home! How could you not be chill?

Then the Dodgers loaded the bases with no outs in the 8th inning, and my butt clenched straight through to the back of my teeth. Aroldis Chapman couldn’t quite strike out the side (he came close), and the Dodgers tied the game. The sense of terror crept back in.

The Cubs managed to load the bases in the bottom of the frame, but it came with two outs, and it came thanks to a second intentional walk in the inning that was designed to bring Chapman’s spot in the order to the plate.

Miguel Montero got the call to pinch hit, and everything in our being screamed out PLEASE-MIGGY-JUST-GET-A-HIT. And when he missed a brutally bad hanging slider from Joe Blanton, there was a collective sense that “that was the one. That was the pitch.”

Except Blanton went back to the well with an 0-2 slider that stayed right in the zone, and Montero absolutely unloaded on it:

So much elation and madness, in fact, that the bar I was at, across the street from Wrigley, was physically shaking. (And we barely even noticed that Dexter Fowler wound up going back-to-back with Montero.) I’m told from folks at Wrigley Field that it was the loudest, most raucous moment they’ve ever experienced at the park. Good thing the Cubs are renovating the old girl, or she might not have survived it.

The grand slam was immediately – and I mean IMMEDIATELY – an iconic moment from the playoff run. You knew it, and you allowed yourself to think about the possibility that the Cubs were about to need only three wins to reach the World Series before the Dodgers got to four wins. It really might happen.