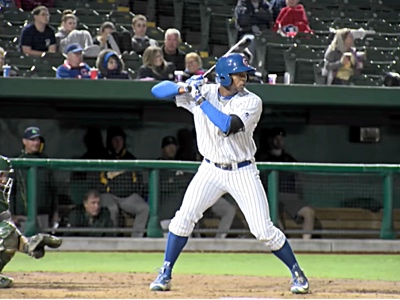 I can’t say I’m surprised, but I sure am pleased: Eloy Jimenez was recently ranked as the fourth best outfield prospect in all of baseball by MLB Pipeline.

Why is that such a noteworthy distinction?

Well, aside from the more obvious reasons, these rankings include all three outfield positions.

So, not only does the number of candidates increase three-times over (making a near-top finish even more impressive), it includes a number of center field prospects as well – and they tend to be, for positional reasons, valued more highly as prospects.

A fourth place ranking, then, implies that the analysts at MLB Pipeline really love Jimenez and his bat. There’s plenty more to be excited about, so let’s discuss.

In case you missed it, Jonathan Mayo, Jim Callis, and the MLB Pipeline crew has been releasing its top ten prospects at every position, in advance of the MLB Pipeline Top 100 Prospect Rankings release this Saturday. Already, we’ve made note that Jeimer Candelario (third base) and Ian Happ (second base) were ranked among the best at their positions. But today, it’s all about the outfielders, per MLB Pipeline:

Although Jimenez’s fourth place ranking is impressive on its own, I want to point out just how well thought-of the three players ahead of him really are.

Unfortunately, almost none of the notable 2017 Top 100 Prospect lists are out yet, but on last year’s MLB Pipeline rankings (updated at midseason), each of Andrew Benintendi (5th), Austin Meadows (9th), and Victor Robles (10th) were top ten prospects in all of baseball. In other words, the three outfielders better thought-of than Jimenez were some of the game’s best young players last year and may even  move up the list this Saturday when the prospects are re-ranked.

That’s really saying something about his relative value throughout the league.

Of course, we already know Jimenez is awesome, but this relative ranking among his fellow outfielders is rather telling of where he might end up on Saturday. Consider again that last year, Jimenez was ranked as the 23rd best prospect in baseball. Ahead of him, sat those three outfielders above (who are still ahead of him today), but also two other outfielders, Lewis Brinson (14th) and Clint Frazier (15th), that he’ll now be ranked ahead of. I’m not quite sure he’ll be able to crack the top ten overall, but there is a chance.

And either way, Jimenez could well be the Cubs’ first top 15 prospect in a over a year – which is awesome.

For more on Jimenez, check out Luke’s recent deep dive, if you missed it.