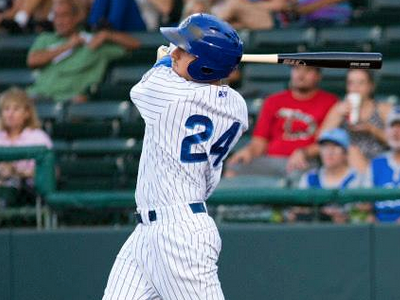 The Cubs’ farm system is extremely deep in outfield prospects. The best prospect in the system, Eloy Jimenez, is among the best outfield prospects in baseball. Ian Happ, who figures somewhere in the Cubs’ top three or four prospects, may yet wind up in the outfield (if only part time). Some people would still consider Albert Almora a prospect, and he is already one of the best defensive outfielders in Major League Baseball. The low minors feature a handful of relatively high ceiling outfielders, headlined by D.J. Wilson and Eddy Martinez.

And then we have Iowa. The Cubs’ Triple-A affiliate will likely carry at least four outfielders who could appear in the Major Leagues this season, and that does not include anyone who might be signed as a minor league free agent. Taken together, they give the Cubs a very impressive amount of depth on top of an already talented and deep Major League outfield lineup.

We’ll start with the only one of this quartet on the 40-man roster: Jacob Hannemann.

Hannemann has been a bit of a surprise to Cubs fans since Cubs the drafted him (instead of a pitcher) in the third round in 2013, and paid him well over slot to sign. He had been away from baseball for some time until shortly before the draft, but the Cubs bet on the tools despite the fact he was going to need extra development. In 2016 it began to look like that bet just might pay off after all. In 74 games (limited by injury), Hannemann hit .247/.326/.426 with 10 homers and 26 steals in Tennessee. He walked at a 7.6% rate, struck out at a career low 16.8% rate, and finished with a wRC+ of 119. The Cubs took notice of his quiet success, and the result was his addition to the 40-man roster, despite a lack of consensus that the move was coming.

The upside on Hannemann is a very good athlete who can play well above average defense in any outfield position, has a left-handed swing that produces plenty of line drives, is a fast and high quality base runner, and who could probably produce an OPS in the low .700s while adding a dozen home runs and a couple dozen steals with sufficient playing time. In other words, Hannemann may yet turn out to be a solid starting outfielder or very good bench/platoon type.

Despite being on the 40-man, he may be the least likely of this bunch to reach the majors prior to September. Hannemann needs more experience, and I suspect he’ll get it as Iowa’s primary center fielder.

Next on list is the center fielder who largely took over in Iowa when Almora was promoted last year: John Andreoli.

Andreoli’s game revolves around getting on base, and then stealing more bases. In 140 games for Iowa last season, Andreoli got on base at a .374 clip, and once there stole 43 bags. He also hit a career high 12 home runs as he appeared to be adjusting his contact-heavy approach in favor of generating a little more power. His very high walk rate (15.2% last year) will help him get on base in the majors, but the ability to drive the ball into the gap and occasionally over the fence certainly won’t hurt him.

Andreoli’s power increase has come at the expense of more strikeouts (26.3% last year, and 21.7% in 2015). The strikeout rate is trending towards the high side even for a slugger; for an on-base type, it means he has to rely on the walks to maintain his OBP. That could be a problem against big league pitching.

Further, while he played all over the outfield for Iowa last year, there have been concerns for awhile that Andreoli’s arm may not make right field a regular option for him long-term.

Still, as a right-handed bat who can come off the bench to play any outfield slot, and could spot start or platoon in left or center – not to mention one who adds value as a baserunner off the bench – probably the only reason we haven’t seen Andreoli in the majors so far is that he is in line behind two other light hitting young outfielders in Matt Szczur and Albert Almora.

And then we have a lefthanded hitting corner outfielder: Bijan Rademacher

Rademacher has producing very nice looking numbers in the minors since 2012, and last year was no exception. His first 86 games with Tennessee translated into .313/.395/.484 production, and in 22 games with Iowa he totaled .286/.350/.400. Rademacher is not a major power guy – just 10 home runs for the season – and we have to go back to 2013 to account for his last twenty stolen bases, but he is a consistently good hitter.

As recently as 2105 in Double A he posted a walk rate (15.5%) in excess of his strikeout rate (13.9%). And his Iowa numbers of 8.6% and 17.3% aren’t bad at all for a guy seeing Triple A for the first time. The combination of good hitting and the ability to draw walks should make him a relatively high OBP option in a bench role or as part of a corner outfield platoon.

Unlike the other four outfielders mentioned here, Rademacher will not be in big league Spring Training. A moderate surprise.

The best of this bunch, and the youngest, is right-handed hitting Mark Zagunis.

The Cubs drafted Zagunis as a catcher/outfielder in 2014, but he quickly moved to the outfield full time. He mostly plays on the corners, but I think he has the speed to handle center for limited stretches if needed. And he plays pretty well on the corners; Hannemann may be the only outfielder in this quartet who could top Zagunis in defensive rankings in the corners.

That strikeout rate is a little high for a guy with only moderate power, but the contact he does make tends to be hard, so I suspect he can maintain a good OBP as a Major League player. Steamer projects him for a 2017 Major League line of .247/.330/.387; that’s approaching big league average (94 wRC+), and that’s not bad for a first year projection. ZiPS is slightly more optimistic, at .242/.336/.391.

Unless the Cubs really need a left-handed bat, Zagunis is probably the most likely of this bunch to get the call if the Cubs need an outfielder in the early part of the season. Longer term, I suspect he would do just fine as an every day left or right fielder should such a position ever open up for the Cubs. Otherwise, Zagunis would likely be an asset coming off the bench. To begin the year, though, he’ll most likely return to Triple-A.

For 2017, then, the Cubs have a wealth of outfield depth. Zagunis and Hannemann have the potential to turn into future regulars, but all four could find a home on a Major League bench in relatively short order. And when they do, there will be another wave of outfielders coming out of the low minors ready to take their place.