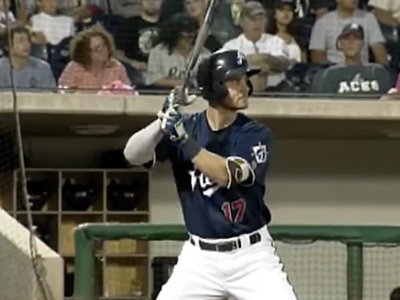 Back in November, Chris Mitchell wrote – broadly – about this offseason’s Minor League free agents, with this to say:

To that end, Mitchell pointed his KATOH projection system towards the 2016-2017 Minor League free agents, to see who might produce something worthwhile in the near future. And at the top of 25 best projected players is the Cubs’ newest Minor League signing, outfielder Todd Glaesmann.

According to Baseball America, the Chicago Cubs have signed free agent outfielder Todd Glaesmann to Minor League contact – and I almost forgot you could sign non-pitchers to Minor League deals.

A quick summary: Glaesmann was drafted by the Rays in the third round of the 2009 MLB Draft. He spent five years in that organization – getting as high as Double-A in 2013 – before being traded to the Arizona Diamondbacks in December. From 2014 – 2016, Glaesmann bounced between Low-A, High-A, Double-A, and Triple-A, while failing to find a permanent home within the D-Backs organization. He did finish the year out in Triple-A (August 7 – end of season), during which he slashed .271/.320/.500.

By my (quick) stat-line-scouting of Glaesmann’s Minor League career, I can tell you that he’s a familiar type of player: can hit for average, can hit for power, but doesn’t get on base at a prolific rate. At Triple-A in 2016, for example, Glaesmann hit for .274 AVG and a .457 SLG, but got on base at just a .305 clip, thanks to a ridiculously low 3.8% walk rate.

My guess is that the Cubs are hoping to take his bat-to-ball skills and raw, natural power and teach him to be (patent pending) selectively aggressive.

Circling back around to Chris Mitchell’s article and projections, you’ll find that there are at least some things to be excited about (to the extent that a Minor League free-agent outfielder signing can excite you). First, as I mentioned above, Glaesmann’s 2.2 KATOH WAR projection leads all Minor League free agents. Although, I should point out that the 2.2 projected WAR is not for 2017, but rather for the next six seasons combined – hey, he was a Minor League free agent for a reason.

Even still, the actual projection, in my opinion, is less important than his relative positioning above the rest of the Minor League free agents.

And in addition to his offensive potential, which we’ve already discussed, Mitchell gets into Glaesmann’s defense, which is actually quite impressive. Now a 26-year-old outfielder, Glaesmann’s defense was 10 runs better than the average center-fielder in 2016. And although he doesn’t steal many bases (just 10 over the past two seasons), he has more than enough speed – together with the other necessary skills – to make for a competent defensive outfielder. In that regard, this signing makes a whole lot more sense.

It’s one thing to dream about the untapped potential of an offensive-minded outfielder who just hasn’t gotten the right coaching yet, but it’s a lot more practical to bank on a defensively-sound outfielder, capable of covering center field at the Major League level in a pinch. Good depth is good depth, and if it comes with a bit of upside, well, all the better.

In that regard, Glaesmann will be added to an already-impressive group of depth outfielders available to the Cubs this year at Triple-A Iowa.

As a final aside, Baseball America is reporting the official signing of RHP Casey Kelly, as well.

I discussed Kelly as a potential option for the Cubs here at Bleacher Nation a couple of weeks ago, but now it appears to be official. In fact, he’s already been spotted on the Spring Training non-roster invitee list, so you can expect to see more of him soon.

The Cubs – obviously – intend on competing to the best of their ability this summer. It just so happens, making shrewd Minor League free agent signings is a part of that. An unsexy part most of the time, sure, but a part of it nonetheless.