Remember When the Cubs Feasted on Alfredo Simon, Then Did It Again? Actually, All the Reds? Skip to content 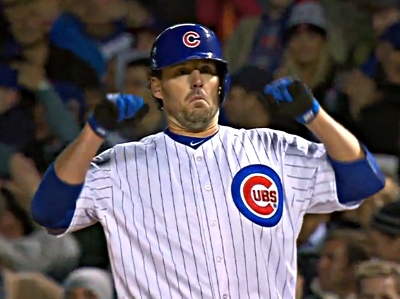 Ah ha! This may be the rare “remember when” that some of you actually don’t remember!

Well, at least until I remind you. Then you’ll remember.

The Cubs opened up Wrigley Field last season with a three-game series against the Reds. There’s no doubt you remember the home opener, because it was the one with the late, dramatic Addison Russell home run, after the Cubs had been no-hit for most of the game.

But how about the rest of the series? Remember anything about it?

The very next game, the Cubs faced Reds starter Alfredo Simon … for less than an inning.

On a cold night at Wrigley, the Cubs worked Simon in every at bat, and wound up notching four hits and three walks on 49(!) pitches before he’d recorded three outs:

Even John Lackey got in on the fun, but maybe didn’t quite know what to do in celebration when he’d reached first base: In the inning, the only outs that were recorded came on a Jorge Soler sac fly, and two Jason Heyward strikeouts (sorry, Jason).

The Cubs wound up winning 9-2, and making Reds pitchers throw a whopping 188 pitches in just 8.0 innings – that’s 23.5 pitches per inning, for those without a calculator handy. The game set the stage for what was to come when the Cubs faced the Reds in 2016: lots of blowout wins by the Cubs, and lots of time in the game for the Reds’ awful bullpen.

Believe it or not, even after the laugher, the Reds saw fit to have Simon’s next start come against the Cubs. Who can guess often what happens when a team rips a pitcher and then sees him again just 10 days later?

Yup: the Cubs blew Simon up for eight runs in just 2.2 innings of work, ultimately pinning another 9-spot on the Reds, and offering me a chance for one of my favorite text-only Enhanced Box Scores of the year:

It’s a good thing the Cubs got to play the Reds so many times in 2016, right? I mean, if they’d lost those 15 games instead of won them, the Cubs would have … still won the NL Central by 2.5 games.