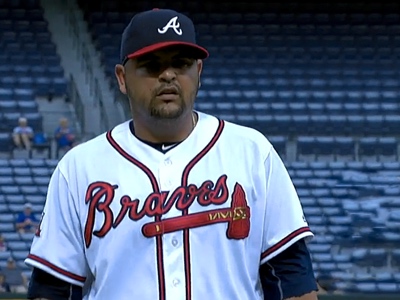 With pitchers and catchers reporting in just a matter of days, the Chicago Cubs have been stocking up on some last-minute Minor-League deals and depth additions.

For a few recent examples, they’ve added righty Eddie Butler, righty Dylan Floro, and outfielder Todd Glaesmann in the past two weeks alone. After all, you can never have enough lottery ticket, flyer, or depth players stashed away at Triple-A Iowa (well, you can, but the Cubs aren’t there yet).

So it should come as no surprise to learn that the team added yet another starting pitcher to the group.

Like most young, recently-released MLB pitchers, Perez has not done well early in his career, but does have some interesting upside lurking beneath the surface. On the one hand, his results have been terrible (5.18 ERA) and his overall peripherals aren’t much better (4.85 FIP, for one example). While his 8.8% walk rate is just slightly worse than average, his 13.4% strikeout rate is borderline unusable. In addition, despite a perfectly reasonable BABIP, he’s allowed opposing batters to hit .279 off him so far in his career.

But there are reasons for optimism.

First, Perez generally has solid numbers through his minor league career, and has been regarded as a legitimate prospect (albeit not a top one) in a pitching-heavy Braves farm system.

Second, Perez has had an excellent groundball rate (53.0%) in his limited Major League career – a characteristic the Cubs front office has clearly targeted throughout the offseason, and for good reason. The Cubs had the league’s best defense last year – by a country mile – and figure to be even better in 2017, as Javy Baez grabs more starts at second base and around the infield.

Third, Perez’s soft contact rate ballooned up to 19.6% last season, which would have been tied with Jose Fernandez for the 23rd best rate in baseball (had he enough innings to qualify). Similarly, his hard hit rate (29.6%) would have tied for 16th best in baseball with the Cardinals’ Carlos Martinez and the Rays’ Drew Smyly.

Perez has also potentially been unlucky with his home run/fly ball ratio, which is up at 12.6% for his career, but was even worse in 2016 (13.7%).  In reality, especially considering his ability to induce weak contact, you might reasonably expect something closer to league average (9-10%) or better.

Although Perez toyed with a couple of other pitches in 2015, he cut that down to just a fastball (identified as a sinker by FanGraphs), a curveball, and a change-up last year. Although he’s been caught in the mid-90s with his fastball and has a big build (6’0″, 240 lbs), he usually works in the lower 90s, and isn’t much of an overpowering pitcher.

He dealt with some shoulder issues last season, but Perez was well enough to pitch in the Venezuelan Winter League this year (albeit with mediocre results over 18.0 innings).

At the end of the day, though, Perez is a young starting pitcher the Cubs were able to get for essentially nothing. He has had struggled in the very recent past at the highest level, but there are some peripheral statistics that leave room for encouragement, and some others that indicate he may get better results in front of a defense like the Cubs.

Given the questions in the 7-12 spots of the rotation – I consider the 6th spot covered by some combination of Mike Montgomery and Brett Anderson – Perez is yet another excellent addition to the organization.

For now, he’ll theoretically fight for a spot in the rotation this Spring, but will most likely head out to Triple-A Iowa at the start of the year, (where he’ll serve as extreme rotational depth for the Major League squad, and – hopefully – continue developing). Every Major League team needs and has that depth, but it’s good that the Cubs always manage to find and attract the younger versions of these pitchers.