Good to See: Kyle Schwarber Getting in Outfield Work (VIDEO) Skip to content 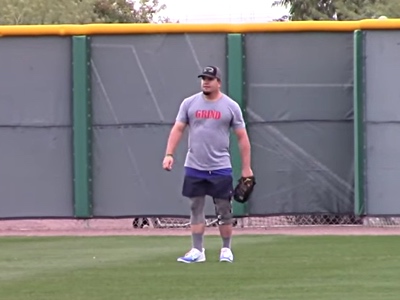 As we discussed recently, keeping tabs on Kyle Schwarber’s re-adjustment to, and development in, the outfield after his 2016 knee injury is going to be among one of the most important stories of the spring.

Fair or unfair, questions about Schwarber’s ability to play average left field emerged at the end of 2015, and, before he could start down the path to answering them, a freak injury ended his regular season. Moreover, although Schwarber returned to hit (magnificently) in the World Series, he was not cleared to play in the outfield. Even now, he’s just 10 months removed from the injury and subsequent surgery, so I’m still expecting there to be a process here.

To that end, the good folks at Cubs Insider popped a video of Schwarber working in the outfield onto YouTube:

It’s all just practice, of course, so there’s only so much you can take away from the video, besides enjoying Schwarber’s overall beast-ness. The mere fact that he’s taking fly balls is a good sign, and I like to see that he’s getting actual outfield instruction and reps (as opposed to merely testing out the strength of his knee, and working on turns and lateral movement).

There’s more on Schwarber’s work in the write-up at Cubs Insider, and it’s looking like you’re definitely going to want to subscribe to their YouTube channel this spring if you’re obsessive about this kind of stuff.