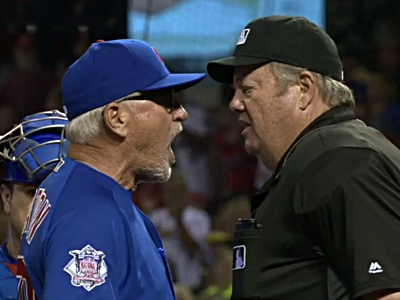 Allow me to offer you a tip – totally self-serving, sure, but it’s a good tip nonetheless: if you’ve grown weary of seeing too many political posts on Facebook from your friends and family, consider marking some of the pages you like (for example, Bleacher Nation) as “See First”. That way, you’ll see more things in your feed from the pages you like, rather than solely whatever Facebook decides to show you. To do it, you go to the page you like, you click on the button that says “Following,” and instead of leaving the “Default” box checked on “In Your News Feed,” you select “See First.” Boom. More stuff in your feed from that page. My experience on Facebook has improved since I did this with a few select pages.

Alternatively, if you don’t want to “See First,” just go to that page, interact with some posts (like, comment, share), and then do it again when you see a post from that page pop up in your news feed. That teaches Facebook more about what you want to see. Otherwise, it assumes you want to see more of your aunt’s rantings, since you always argue with her.

With all due respect to a man I have much respect for. These are band aids. The biggest, best and most radical change is to a 7 inning game. https://t.co/1umMjakwf0