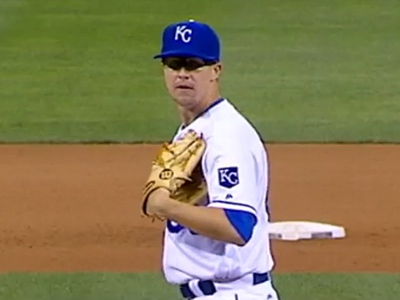 Brett shared the details of the trade, plus his initial reaction, here.

But about three hours earlier, Luis sent a group message to me and Brett about a Royals pitcher who’d just been DFA’d, and immediately, we knew he was onto something. The Cubs have been targeting young, upper-minors starting pitcher depth a lot lately – and that goes double for guys with options left and the ability to get ground balls. I was working on the MLBits at the time, so I looked into Mills, concluded that the Cubs were likely to have interest, popped it into the post, and then the trade happened.

It was a fun few hours.

So let’s get to know the newest Cubs starting pitcher/pitching prospect, Alec Mills.

After his junior year of college, the Kansas City Royals selected Mills in the 22nd round of the 2012 Major League Draft. But after swinging between the bullpen and rotation in rookie and A-Ball, Mills underwent Tommy John surgery in the middle of the 2013 season (his first full professional year). He made it back onto the field in 2014, but was able to complete only 38 innings across seven starts with some depressed velocity on his fastball.

In 2015, his first full, healthy professional season, Mills sported great numbers and restored velocity to boot. Across 21 starts (113.1 innings pitched) at High-A, Mills earned a lovely 3.02 ERA with an even stronger 2.09 FIP. Indeed, his 23.5% strikeout rate there looked strong on its own, even before taking his stellar 3.0% walk rate into account. And when he bumped up to Double-A at the beginning of last season, he arguably got even better.

Through 12 starts (67.2 IP) at Double-A in 2016, Mills lowered his ERA to 2.39 while still posting strong peripherals (2.13 FIP). Despite facing tougher competition (some say the jump to Double-A is one of the hardest in baseball), his strikeout rate increased to 26.4%, and his walk rate remained well below average (4.7%).

Continuing a rapid post-TJS ascent, Mills was promoted to Triple-A in June, and although it didn’t go quite as well as his first few stops (4.19 ERA through 58.0 innings), he was still clearly a pitcher on the rise. In fact, he eventually tossed 3.1 innings of relief at the Major League level late last season, but the sample is so small it doesn’t quite merit any significant statistical discussion. The simple fact that he’s already debuted is the relevant data point here.

Mills ranked 90th on Dan Szymborski’s ZiPS Top 100 MLB Prospects for 2017 – meaning that using a stats-only projection, he figures to be one of the better prospects in baseball. With the Cubs, however, he’s more than just a pure prospect. He immediately steps into the rotational depth role, alongside guys like Brett Anderson and Eddie Butler. And what was once looking like a confusing weakness for a competitive Cubs team just a few weeks ago is suddenly looking like a surprising strength with plenty of upside.

I am confident that some combination of Mike Montgomery, Anderson, Butler, and Mills will provide the Cubs with 200 innings of solid pitching performance at the back of the rotation in 2017. And of course, three of those guys (all but Anderson) are under control beyond this season. Mills, for example, isn’t even arbitration eligible until 2020, and is under team control through the 2022 season.

As a prospect, Mills ranked well in the Royals’ system, and figures to show well in the Cubs’ system, too, once he’s incorporated.

Although MLB Pipeline hasn’t yet updated its team lists from mid-2016, they do put new acquisitions into the then-current list to at least give you a rough idea of where a prospect ranks. As of now, MLB Pipeline ranks Mills as the 16th best prospect in the Cubs system, and according to both Baseball Prospectus and Baseball America, he was in a similar spot (just outside of the top ten) for the Royals before the 2016 season as well. In the latest FanGraphs rankings, Mills fell just outside the Royals’ top 20 thanks to a bullpen projection, and, in Eric Longenhagen’s view, a lack of precise command within the strike zone, as opposed to good control (remember that fine distinction?). BA’s write-up of the trade notes that Mills was set to be ranked 14th in the Royals system right now. Roughly speaking, then, you’re looking at a guy in the 15 to 25 range in the Royals’ system, and probably in the same range in the Cubs’ system.

In very limited duty at the Major League level last season, Mills primarily threw his fastball around 91.8 MPH, a curveball (78.8 MPH), and a change-up (80.2 MPH). So although his fastball has been clocked at 94.2 MPH at its max, he appears to be the type who operates in the low 90s. In addition, Mills throws a change-up that is considered a solid second offering from scouts at MLB Pipeline, as well as an average curveball and slider.

Because of Mills’ his history of swinging between the bullpen and the rotation, as well as his less than overwhelming stuff, some prospecting pundits view Mills as more of a future reliever (with some ability to make spot starts) than a true member of the rotation. That’ll have to be something the Cubs work out for themselves. We know that they’ve been interested in using guys as super utility pitchers in the past, but they’re starter needs are well documented as well. It’s another wait and see.

On the statistical side of things, there’s one other interesting thing to point out, so long as you don’t take it too far.

Yesterday, our Minor League editor Luke Blaize made an interesting comment about Mills on Twitter that I just had to investigate for myself:

PSA: Do not compare the minor league numbers of Alec Mills and Kyle Hendricks. It is dangerous. You've been warned.

It’s just too juicy to ignore, right? So I did a little digging, and here’s what I found:

In High-A, Mills and Hendricks had almost exactly identical walk rates (3.0%) and earned run averages (3.00 ERA), with strikeout rates and batting averages against in the same neighborhood. In Double-A, Hendricks’ ERA took the best kind of nose dive (1.85 ERA), but Mills was hardly left in the dust (2.39 ERA). Once again, their walk rates and averages against were both very similar – which is to say both were very low (and much better than league average).

And finally in Triple-A, each took a hit in the earned run department (which isn’t very surprising given that both the Cubs and Royals Triple-A affiliates play in the offense-heavy Pacific Coast League), but their strikeout rates were exactly equal. These two are hardly the same pitcher, but there certainly are a lot of statistical similarities as they climbed up the ladder.

In a smaller sample, Mills had the much rougher go of it overall at Triple-A, though, which is worth noting, given that the hitters improve at every step up the ladder, and you especially face more disciplined veterans in Triple-A than in Double-A.

And that’s where we’ll leave it today. As soon as Mills gets some more starts under his belt in Triple-A, we’ll be able to revisit his potential and future with the Cubs. For now, he’ll head to Spring Training battling for a spot at the back of the Cubs rotation, before likely heading down in Triple-A Iowa, where he’ll wait in the wings for his next shot at the Majors.