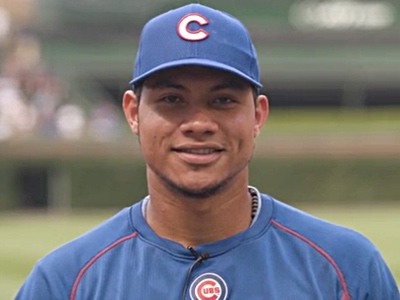 A few weeks back, we took a look at some hitter contact-quality statistics that suggested Jason Heyward was a bit unlucky (in addition to still being pretty bad) at the plate in 2016.

In short, FanGraphs’ Tony Blengino found that Heyward’s overall production, based on the quality and type of contact he created, should have probably been much better than it was (even if it still wasn’t quite in line with pre-season expectations).

In any case, the stats are known as Adjusted Contact and Adjusted Production. The former takes into account the “granular exit speed and launch angle data” of various players, while the latter does the same, while throwing strikeout and walk rates into the mix.

But Blengino, as you may have guessed, didn’t limit his analysis to Jason Heyward or right fielders, alone. Instead, he’s been going position by position, applying the data to every player in the league.

Most recently, he reached NL catchers, where we find the young Cubs breakout Willson Contreras in the group. So let’s take a look at the type and quality of Contreras’ contact in 2016 to see how well he ranked last season and where we might expect his production to land in 2017 and beyond, starting with individual data points, before building up to the catch-all Adjusted Contact and Adjusted Production scores.

Contreras wasn’t exactly tearing the cover off the ball in 2016, but according to FanGraphs, his FB and LD exit velocities are within one-half standard deviation of league average. So really, his ground ball rate (one-half to one STD less than average) was doing most of the damage to his relative overall exit velocity.

Of course, exit velocity is only half of the story. The type of contact he was making, matters as well.

While Contreras could probably stand to hit a few more balls in the air and as line drives (both were one-half to one STD below average), he really succeed at limiting pop-ups. And in recent years, we’ve learned that (statistically) infield pop-ups are among the single worse type of contact a hitter can make (obviously, we knew that anecdotally for a quite some time, but the numbers do supported the theory). In addition, given his solid FB and LD exit velocities, he could stand to hit more of them.

All in all, with no strikeout or walk rates considered, Contreras’ Adjusted Contact Score (which you can relate to the scale set by wRC+, for reference) was an excellent 133. Here’s how he ranked against other starting catchers in the National League:

Ranking third among all NL Catchers in adjusted contact is impressive, but it is only half of the story. Strikeouts and walks matter very much and change Contreras’ story and final ranking quite a bit. So let’s continue.

Contreras was absolutely stellar for the Chicago Cubs during the 2016 season, and is undoubtedly the catcher of the future. But that doesn’t mean he still doesn’t have things to work on. Heck, if Kris Bryant had things to work on after his 2015 Rookie of the Year campaign, anyone does.

And for Contreras, not unlike Bryant, that thing to work on is his K-BB ratio.

In fact, we can narrow that down even further: Willson Contreras needs to strike out a little bit less. Don’t get me wrong, his 23.7% strikeout rate is hardly a concern, but in the interest of optimizing his entire hitting profile, that is the nail that sticks out the furthest (as he’s actually already walking at an above average rate).

In 2016, Contreras hit his way into a really impressive 126 wRC+. If you’re unfamiliar with how good that is relatively, consider that (had he enough plate appearances to qualify), he would have finished tied for the 32nd best rate in baseball, one spot ahead of Nolan Arenado.

When you throw in the fact that he was both 1) a rookie and 2) a catcher (who also split time simultaneously re-learning how to play the outfield), there’s nothing to feel but excitement. But where does this leave his adjusted production?

Although that’s less than the wRC+ he actually put up last year, it is still 16% better than the league average and ranks among the top five for NL Catchers.

Hopefully, the names and order of the list above (vis a vis the adjusted contact list) serve to remind you how important a hitter’s K-BB ratio is. Further, despite having things to work on, Contreras has clearly found himself in pretty elite company.

As it turns out, those top five NL catcher adjusted production rates actually lead all of baseball, as well. So even when you peel back all of the noise and luck, the rookie, Contreras, was the fourth best offensive catcher in 2016. Awesome.

According to Blengino, who has a write-up on all 15 catchers in the study, Contreras has plenty of room to grow. “His strong Adjusted Fly Ball Contact Score (177) suggests significant future power development, if only he can enhance his fly-ball rate. His liner rate is also due for some positive regression. One more middle-of-the-order type hitter is on the way for the Cubbies.”

Somehow, the Cubs may have developed yet another dominant, middle-of-the-order type hitter. How will NL pitchers manage?

When you consider that Contreras’ defense is already quite strong and his game management/receiving skills have improved immensely in the past year, it’s hard not to dream on his sky-high potential. The Cubs’ core is alive and well, my friends, and Willson Contreras is a big part of it.