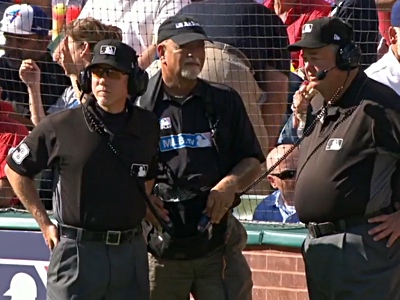 Well, at least it’s a pace-of-play change we can all agree upon.

In any case, today’s installment comes via ESPN’s Jayson Stark, who reports that MLB is seeking a couple instant-replay-related changes to the way games have been held up in recent years.

First, MLB would offer a “guideline” that the replay officials in New York should make a determination on a replay within two minutes, and if they cannot, the call on the field should stand, unless there are extenuating circumstances.

Given that the call on the field should not be overturned unless the official can “definitively conclude” that the call was incorrect, it only makes sense that there should be a time limit. If it’s not clear within two minutes, in my view, that should be that. Let the game proceed. Clearly, MLB has heard our collective cries on this very issue, and hopefully it will be put in place for the 2017 season.

The second change would relate to the dreaded “top step” delay – you know how it goes: a manager moves to the top step, asks the umpires to hold up so that they can make a decision on whether they want to use their challenge. Stark’s sources say MLB wants to limit this process, strictly, to 30 seconds. The rules already say that, when prompted by the umpire, the manager must “immediately” decide whether to challenge. Clearly, that hasn’t yet been employed (except for one infamous incident late last year, in which the Reds lost a game to the Cardinals because there was no “immediate” challenge).

Fingers crossed on these changes, which do nothing to detract from the game, itself, and could cut out a little bit of dead time here and there.