Oof for the Cardinals: Alex Reyes to Have Tommy John Surgery Skip to content 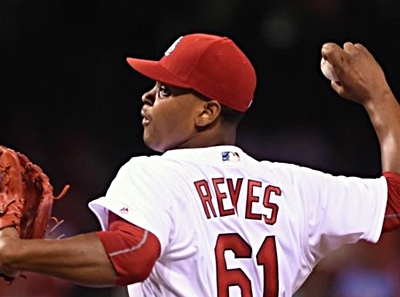 It was the worst possible outcome from yesterday’s MRI, as the Cardinals organization held its collective breath and hoped for good news that wasn’t coming:

Alex Reyes, after review, will have a Tommy John surgery, #cardinals affirm. Paletta will do surgery here in Jupiter.

Alex Reyes, 22, is the top pitching prospect in the game to most pundits, and his loss is not only a significant blow to the Cardinals’ playoff hopes in 2017, but also the sport in general. Guys like Reyes, with his electric stuff and top-of-the-zone 99mph fastball, are just so fun to watch. Whatever your feelings about the Cubs and Cardinals rivalry, and the Cubs’ competitiveness in the NL Central, this just sucks to see.

Reyes will be out for the entire 2017 season, and, if he has a speedy recovery, could be back in time for the start of the regular season in 2018 (though you’ve got to figure he’ll be on a significant innings limit). The Cardinals’ rotation will be headed up by Carlos Martinez (he of the recent extension), Adam Wainwright, Mike Leake, Michael Wacha, and Lance Lynn, who is returning from his own Tommy John surgery. The Cardinals have usable depth behind that group, but, on paper, it’s not strong.

As for those NL Central implications, it’s impossible to ignore the impact of one of the Cubs’ top competitors losing a pitcher who could have plausibly posted a 4.0 or 5.0 WAR this year. The projections were already unkind to the Cardinals, and this will chip away at them further. I wouldn’t call any divisional race an easy road for any team – baseball is too unpredictable – but the Cubs’ greatest challenger in the Central now really looks to be more likely the Pirates than the Cardinals.