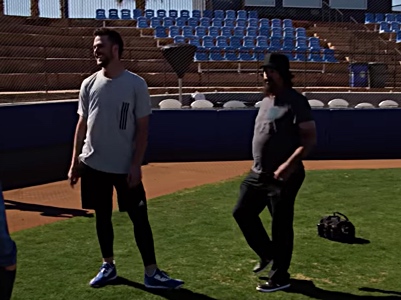 The fine folks at Redbull have a relationship with Cubs superstar and reigning MVP Kris Bryant, which often leads to fun videos. Last year, Bryant had the honor of pranking a Mesa baseball team into thinking he was the new player on the team.

This year, though, the tables were turned on Bryant, who thought he was shooting a workout video for Redbull when the coach throwing him batting practice had to step away. Fortunately, the “sound guy” had thrown a little bit in his life, and offered to stand in …

“Can you autograph a bat for me? Just make it out to Greg Maddux … ”

Yes, that would be Hall of Famer and Cubs legend Greg Maddux in costume, throwing BP to Kris Bryant. Maddux, 50, could probably still get after it a bit, and he also knows his way around a commercial.

Also, the ending especially had me cracking up.

“Do you still want my bat?”