Jon Lester Working - Successfully! - on His Throws to First Base (VIDEO) Skip to content 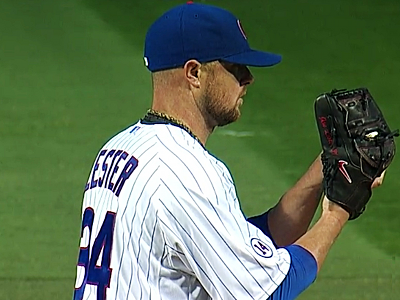 Spring Training is mostly a time for players to get ready to go for the season from a body and healthy perspective. Yes, guys will work on their timing, their throws, their grips, their swings, and all that good stuff, but, for the most part, it’s not as if practicing something enough during drills in February will be *THE* difference in a given season.

So, then, it’s with my tongue firmly in my cheek that I joke about Jon Lester working on his throws to first base here in Mesa. It’s absolutely important that he’s doing it (as he has every year before this one), and it’s fun to see that, yes, he *can* do it, but I don’t want you to think I’m suggesting anything revelatory or transformative here. I’m just having a little fun. Because baseball is fun. And it’s the spring. We’re supposed to be a little more carefree in the spring.

In any case, here’s Lester successfully fielding balls and throwing them to first base:

No, it’s not the most fluid motion or cleanest throw you’ve ever seen, but it would get the job done on most comebackers. If you didn’t know about Lester’s history, I doubt you’d even think twice about these throws. They’re basically normal. Which is swell.

I expect we’ll still see Lester deferring on really short balls to his catcher and corner infielders, tossing underhand when possible, and we may even see him continue to employ the “bounce pass” throw to first base when there’s no other option. But you can’t say that the guy isn’t putting in the work. We’ve seen him working on pickoff throws every year in Spring Training, too, and also throughout the regular season. It’s just one of those things.

But, well, be advised, would-be bunters: Jon Lester can throw you out if you’re not careful!