Who is Kris Bryant? That's Not Just a Question, It's 'Jeopardy' Trivia That No One Knew (VIDEO) Skip to content 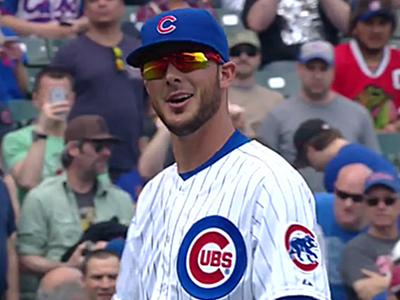 Baseball-specific questions on ‘Jeopardy’ are not made for us. Knowledge on the popular quiz show is designed to be broad based, and only so deep. Think about the baseball-equivalent question of the capital of Montana. What would that be? Which team does Gerrit Cole play for? This team won the AL West in 2016? Something like that?

But alas, this week on ‘Jeopardy’ …

In Corey’s defense there, the question (ok “answer” – stick it with your backwards format, ‘Jeopardy’) did mention World Series and MVP, so dropping a “Zobrist” at least has some cogent defensibility.

But, I mean, it’s Kris Bryant! How could you know Zobrist and not Bryant?

I have no doubt that these college students are otherwise brilliant young people, but a part of me is breaking in this moment.

I’m gonna need to watch Greg Maddux pranking Kris Bryant again just to feel better. (But then I think about Maddux pulling a prank on Corey, and, at the moment of the reveal, when the fake beard comes off, Corey exclaims, “OMG! It’s Ben Zobrist!”)