Javy Baez Remains Flexible About Being Flexible, and That's Good News for the Cubs Skip to content 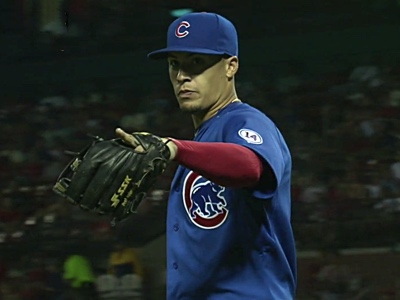 In 2016, Javier Baez started 2 games at first base, 21 games at shortstop, 36 games at third base, and 38 games at second base (Baseball Reference). He also appeared dozens of times at those positions later in games that he didn’t start there.

Throw in a couple of appearances in the outfield – as well the knowledge that he was the team’s emergency catcher – and elite positional flexibility is an understatement.

But given his upward trajectory, post-season prominence, youth, and remaining team control, Baez would probably like to see – and merits – a starter’s share of innings in 2017.

However, given the presence of Ben Zobrist and a crowded infield/outfield picture (even after trading Jorge Soler), there is not a clear opening at any one, set spot. So … what’s the plan?

Much like last year, Baez will likely bounce around multiple positions, but despite the inherent uncertainty associated with that plan, Baez is on board.

At the Chicago Sun Times, Gordon Wittenmyer discusses Baez’s role acceptance, despite his increasingly valuable abilities (especially up the middle) – at least, for now. “Obviously, when I get my years in the big leagues, I want to have my own spot,” said Baez.

It’s understandable, to be sure, but it’s not as though Baez is really slated to be a “bench” player. And I think that’s what often gets lost in these discussions.

Consider that last season – before we knew Baez was about to take a major step forward on both sides of the ball – Baez got into 142 games (tied for fifth most on the Cubs with Jason Heyward). Sure, some of those were late defensive switches and pinch hitting appearances, but he also didn’t get his season going until April 16, so that’s a pretty solid total, all things considered.

Even still, it sounds like manager Joe Maddon is planning on working Baez in even more than he did last season.

Although he admits that 1) Zobrist is going to be the primary second baseman to start the year and 2) the team isn’t 100% sure how the playing time will be worked out, Maddon suggests that Baez will get significant playing time. “It’s all theory right now,” Maddon said via the Sun Times. “Of course, he’s going to play a lot …. Javy was so significant to the conclusion of last season. He’s going to be very significant again this year and years to come.”

Maddon later added that Zobrist might also see some time in the outfield (more on that another time), but as we know that picture is already a bit crowded, too. Kyle Schwarber (LF) and Jason Heyward (RF) are more or less penciled into the corners, while both John Jay and Albert Almora are expected to share center field. Throw Ben Zobrist into the fold and things can quickly get complicated.

But as we saw with Kyle Schwarber’s early-season injury last year, sometimes things can get uncomplicated in a hurry, too. And as a final note, the positional flexibility on the rest of the team should help further alleviate the logjam.

Consider that each of the following starters – Kris Bryant, Ben Zobrist, Kyle Schwarber, Willson Contreras, Jason Heyward, Albert Almora/Jon Jay, and Addison Russell (although, he won’t) – can all play at least two or three other positions capably. Their ability to move around, should open up more opportunities for Baez to play on a daily basis.

So for now, I think the both the Cubs and Baez are happy with his ability to move around the diamond, and the amount of playing time he’s expected to get. Remember, although the defense is elite, the bat is still developing.

If Baez manages to force the issue even further, however, well, then the Cubs will have a pleasant adjustment to make.