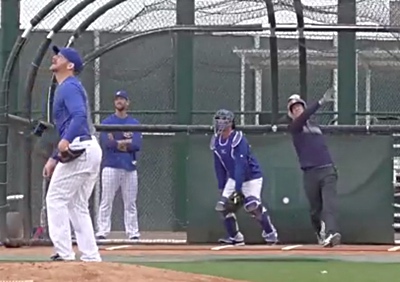 I am cracking up. And watching this again and again.

To set things up, earlier, there was a video of Chicago Cubs President of Baseball Operations Theo Epstein (43, and not a former professional baseball player – or even a high-level college player) taking batting practice against former Cubs pitcher (current Team Canada pitcher) Ryan Dempster. And Epstein really drilled one.

Jesse Rogers took the video to Cubs players Kris Bryant, Anthony Rizzo, and Javy Baez to get their reactions, and the video is absolutely delightful:

I would say Baez and Bryant were legitimately surprised and impressed by the swing. Rizzo plays it cool, perhaps fearing that Epstein’s bat will clearly play in the big leagues, but the only position his aging body can handle is first base. Rizzo doesn’t want to lose his job.