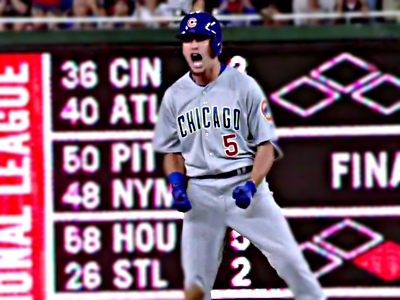 The last few Spring Trainings, Albert Almora Jr. has showed up to Cubs camp looking thicker and stronger than the year before. It’s the kind of maturation process you’d expect from a young man whom the Cubs drafted as a teenager, and who still won’t turn 23 until the first month of the season. It can be easy to feel like he’s been around forever and is not progressing as well as the other Cubs prospects, but Almora is – for one example – still just a little bit younger than Kris Bryant was in his rookie season.

Speaking of Bryant and Almora’s developing strength, it was Bryant who slapped a grand slam yesterday for the Cubs, and today, Almora took the honor:

That was a no-doubter off the bat, as evidenced by the left fielder’s very quick abandonment of any kind of chase. Very bad pitch? Yes. But with two strikes, I like that Almora – who has so much contact ability it can sometimes work against his latent power – was still in a position to crush it.

I wouldn’t expect Almora to break out just yet with the bat in 2017, but it’s not out of the question. He may not have the same offensive upside of someone like Kris Bryant – few do – but if that power comes along a little bit? And the natural uptick in walks that would accompany it? With his contact ability? I still believe there’s no reason to bet against Almora’s longer-term offensive upside being somewhere in the 110 wRC+ range, which, when paired with elite defense in center field, will make him an extremely valuable player.