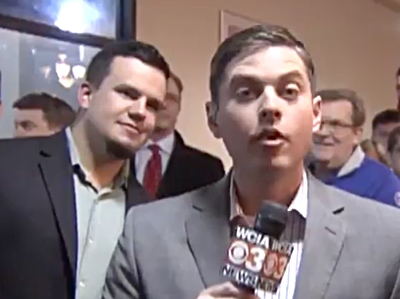 If you told me, without context, that Kyle Schwarber had a standup triple in Spring Training, I would assume something very crazy happened in the outfield.

Moreover, if you told me that the triple was to dead center against the Angels, with Mike Trout patrolling, I might not even believe it. After all, he made one of the most iconic catches in center field in the past decade.

But, this is a thing that happened in yesterday’s game: Kyle Schwarber hit a standup triple to center field, over top of Mike Trout.

Off the bat, that didn’t really even look like much. Schwarber has such strength and torque in his swing, though, that when he barrels the ball, it’s going to go a long way even if it doesn’t look like a rocket off the bat (sounded good, though). I mean, sure, the ball carries well out west this time of year, but that thing went 415 feet and it looked like a pop fly.

Of perhaps more importance was Schwarber turning on the jets after a rare misplay by Trout. Schwarber reached third comfortably. Dude’s just got a thing for triples, I guess.