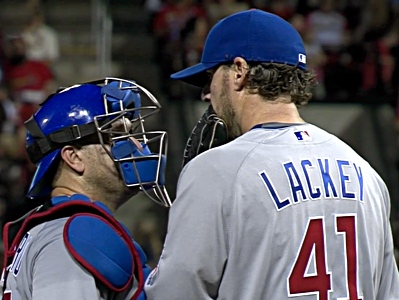 Did you know that yesterday was National Pancake Day? I mentioned it off-hand to the kids in the morning, and the two big kids apparently remembered it all day. As soon as I picked them up from school, they were gleeful: “It’s National Pancake Day! We’re going to have pancakes tonight!” So I made them pancakes (with spinach, fruit, and flax seed blended in, plus extra eggs – add some agave and cinnamon, and not only are the pancakes healthier for you, they taste fantastic).

Arrieta on a player bat flipping him after a HR. "If he's a vet + earned it no prob. If he's a young guy he might wear next one in the ribs"

There are bat flips, and there are BAT FLIPS. (via @nessalimon) pic.twitter.com/09lAUUEcX6

Just three best friends keepin' an eye on each other and messin around. #AMIRIGHT, @ARizzo44 @KrisBryant_23 ? pic.twitter.com/sMajoeysT7

This shirt is swell, and also awfully cheap: https://t.co/pj8m0Ra1R9 pic.twitter.com/qGcfuTbXQa