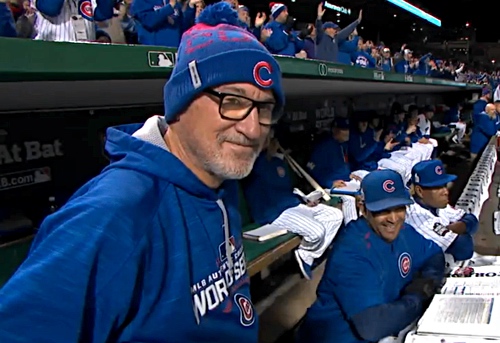 Another clause in Joe Maddon’s contract has surprised the Chicago Cubs manager in the most pleasant of ways.

According to Jon Heyman of FanRag Sports, the Cubs’ World Series run of 2016 triggered a raise in Maddon’s contract, making him the highest-paid manager in baseball, at $6 million annually for the three years remaining on his deal.

Maddon joins good company in Mike Scioscia of the Los Angeles Angels of Anaheim and Bruce Bochy as baseball’s highest-paid skippers. Both Scioscia and Bochy have World Series rings as managers, and Maddon makes three.

It is a well-earned raise for Maddon, whose teams have won 200 games in his first two seasons in Chicago. The team followed up a 97-win season that featured two playoff-round victories (including a round against the arch-rival St. Louis Cardinals) and a berth in the NLCS in 2015 with a World Series championship in 2016. Maddon was the National League’s Manager of the Year in 2015, and runner-up to Dave Roberts in 2016.

Maddon signed a five-year contract worth $25 million after an out clause in his contract was activated when Tampa Bay Rays executive Andrew Friedman left for a job with the Los Angeles Dodgers. At the time, Maddon said he wasn’t even aware of the clause until the Rays’ president called to inform him. While he no doubt appreciated his time with the Rays, that surprise clause allowed Maddon to join the Cubs on a more lucrative deal.

We can only imagine what pleasantly surprising contract clause will be unveiled next.