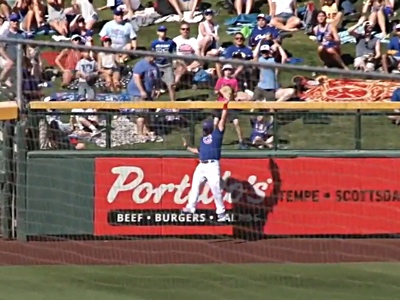 We’ve talked before this offseason about one of the more important, but probably under-highlighted, story lines of this Spring Training season: Kyle Schwarber’s return to outfield defense.

As you’ll recall, the expectation going into 2016 was that, after spending most of his time as a catcher, Schwarber was going to be going through the process of developing and improving as an outfielder. Given his bat, the difference in his total value could be pretty substantial, depending on whether he’s an average defender out there, or something far less than that.

Then, the knee injury happened. Suddenly, Schwarber’s development in the outfield took on a different, more challenging dynamic. But, being that Schwarber is Schwarber, you’d never know there was any added difficulty as he put in his offseason work once he was cleared to play out there (and, heck, the guy is still focusing on developing behind the plate, too).

Look what the guy did yesterday … 11 months after a massive knee injury … a little over a month since he started getting back to work in the outfield … in a dang Spring Training game:

That is an extremely impressive catch for any outfielder, let alone one with Schwarber’s specific background. He tracks the ball perfectly, feels out for the wall as he continues to track, and then times his jump perfectly to snag the ball and avoid a collision with the wall.

Not that we needed more visual evidence that Schwarber is a uniquely athletic big guy, but there you go. Look at the height he gets on the jump, too!