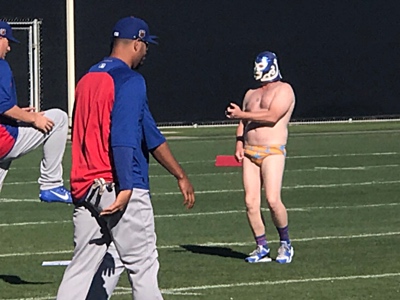 Although last year’s Chicago Cubs camp was loaded with whacky hijinx, churned out daily for the players (and, by extension, for us), this year’s showing has been subdued by contrast.

In fact, for the most part, it’s been limited to various instances of dressing up by beloved team Strength and Conditioning Coordinator Tim Buss.

You might not think you can get a lot of mileage out of one guy willingly making a fool of himself for the good of the team, but then again …

Another day in #Cubs camp pic.twitter.com/ry1JezBZHr

All in a day’s work for the defending world champs. And when they repeat later this year, they can look back at the profound impact Buss’s speedo had on their success.